Ellsbury, Beltran lead Yankees back from four-run deficit to win 7-6

By Unknown - June 18, 2016
The Yankees “Jekyll and Hyde” offense was in true form against the Twins on Saturday, but they woke up just in time to rally from a 4-0 deficit to win 7-6. In the ninth, with the game tied at four and none out, the Yankees loaded the bases after two walks and a bunt single. After Starlin Castro struck out, Jacoby Ellsbury delivered a tiebreaking, 2-RBI single, giving the Yankees a 6-4 lead. Brett Gardner extended the lead to 7-4 with a sacrifice fly to center, and the Yankees won their third straight game against the Twins on Saturday afternoon. 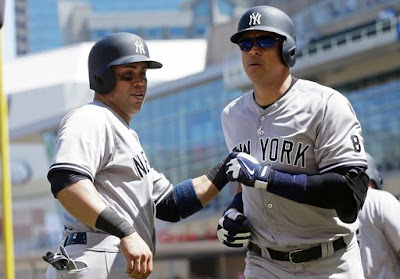 The Twins struck early. With two outs in the second inning, Eduardo Escobar gave the Twins a 1-0 lead with a RBI single to center field, scoring Max Kepler. In the fourth, Byung-Ho Park extended the Twins lead to 3-0 with a two-out, two-run home run. Park leads American League rookies with 12 homers, which has been one of the few bright spots in what has been a rough season in Minnesota. In the sixth, Park’s sacrifice fly off Anthony Swarzak, who came in for Pineda, made it 4-0 Twins.

The Yankees offense looked lifeless for the first six innings against Ricky Nolasco, scattering just four singles without getting a single runner in scoring position. In the seventh, Alex Rodriguez started the comeback with a two-run home run to right, cutting the lead in half. Carlos Beltran followed with a two-run opposite field home-run to tie the game in the eighth, before the Yankees scored three in the ninth to take a three-run lead.


In 5.1 innings, Michael Pineda allowed four runs and six hits. His performance delivered both the good and the bad that we have come to expect from Pineda all season. Pineda looked dominant for much of the afternoon, striking out nine Twins hitters. However, all three runs that he allowed while he was on the mound came with two outs. 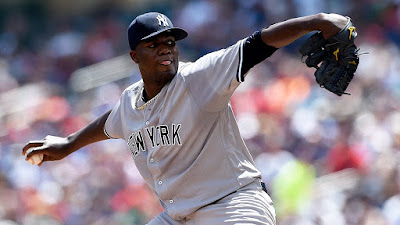 With a scoreless eighth, Andrew Miller earned his fourth win of the season. Aroldis Chapman picked up his 13th save, but struggled as he gave up back-to-back homers by Eduardo Escobar and Kurt Suzuki with two outs.