By Unknown - June 08, 2016
Chris Parmelee started for the first time as a Yankee and made it a night to remember, going 3-for-5, with a double and two home runs to lead the Bronx Bombers to a 12-5 win over the Angels. The Yankees exploded for eight runs in the 6th and 7th innings combined to break away from a close game to guarantee a series win. 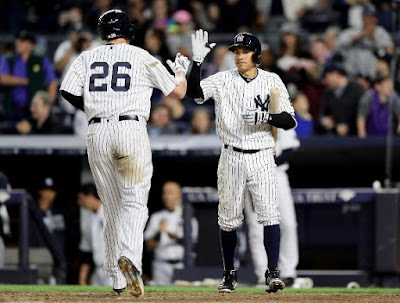 The game was extremely back-and-forth. After Mike Trout's RBI single gave the Angels a 1-0 lead, Brett Gardner's RBI double and Alex Rodriguez's RBI single gave the Yankees the lead. However, Nathan Eovaldi got himself into trouble often. Former Yankee, Gregorio Petit, and Jefry Marte both hit home runs in the third and fourth innings, respectively. After Brett Gardner tied the game at 4-4 with a RBI single in the bottom of the fourth, Albert Pujols led the Angels back into the lead, 5-4, with a RBI double in the top of the fifth. Shutdown innings simply do not exist for Yankee starters.


In the sixth, after Chris Parmelee tied the game at five with a solo home run, the Yankees broke open the game with three more runs. After Carlos Beltran walked and Brett Gardner singled, Carlos Beltran's RBI double scored Jacoby Ellsbury, and then Brian McCann brought in both Gardner and Beltran with a 2-RBI single to extend the Yankees lead to 9-5. 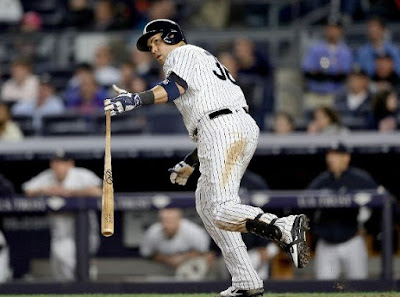 After Didi Gregorius singled to lead off the seventh, Chris Parmelee sent a line drive homer to right, his second home run of the game, to put the Yankees up 10-5. With Brett Gardner on first and two outs, Carlos Beltran's 16th homer of the season to left made it 12-5.

Anthony Swarzak (1-0, 0.00 ERA), who came in for Eovaldi in the sixth, allowed a hit in 1.2 innings, and got out of a jam in the sixth to pick up his first win as a Yankee. Kirby Yates and Nick Goody both pitched an inning to close out the game.

Mike Trout drilled a deep solo home run to right center in the 9th, his 13th this season, off Nick Goody.