By Chad Raines - June 06, 2016
The Yankees dropped two of three tightly contested games to the Orioles over the weekend to drop their record to a measly 26-30. The Yankees will now go up against an Angels team that is also 26-30, and the Yankees must take advantage of this series if they hope to turn their season around. During HOPE Week, a week full of inspiration, community service and, well, hope, we must hope the Yankees use this week to completely turn their season around. With an unimpressive pitching rotation for the Angels, the Yankees should have the luxury of going up against struggling starters. 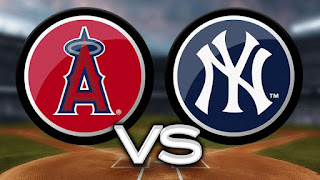 GAME ONE: (Monday, June 6 | 7:05 PM ET)
Matt Shoemaker (3-6, 5.50 ERA) vs. Masahiro Tanaka (3-1, 2.78 ERA)
Through eight starts, Shoemaker had an ERA of 6.81, but over his last two, he's allowed just 4 earned across 15.1 innings lowering his ERA to where it currently stands at 5.50. Still, the Yankees must win game one with their ace on the hill if they have any hopes at winning this series against the Angels. Tanaka has been the ace that the Yankees paid for this season and he must continue his ace status to try to give this lifeless Yankee team some motivation in turning the season around.

GAME TWO: (Tuesday, June 7 | 7:05 PM ET)
David Huff (0-0, 0.00 ERA) vs. Michael Pineda (2-6, 6.41 ERA)
Well, he did it. Michael Pineda has earned himself another start. The Yankees seem to be monitoring him on a start-by-start basis so once again, the pressure is on for the big right-hander. If he struggles against an underwhelming Angels lineup, he may be in jeopardy of a demotion of some sorts. As for the Angels, former Yankee reliever David Huff will make his first appearance of 2016. Huff was very solid for the Yankees going 3-1 with a 1.85 ERA in 30 appearances with the Yankees in 2014.

GAME THREE: (Wednesday, June 8 | 7:05 PM ET)
Jered Weaver (5-4, 5.18 ERA) vs. Nathan Eovaldi (6-2, 4.09 ERA)
As a guy who the Yankees always seem to hit hard, the soft throwing, finesse pitcher Jered Weaver will be juxtaposed by the hard throwing flamethrower in Nathan Eovaldi. Eovaldi was brilliant against the Angels last season and the Yankees had a lot of success against Weaver so if all goes as expected, there's no reason the Yankees shouldn't win this game.
GAME FOUR: (Thursday, June 8 | 7:05 PM ET)
Jhoulys Chacin (2-3, 4.50 ERA) vs. Ivan Nova (4-3, 4.41 ERA)
Chacin is coming off a start in which he hurled a complete game against the Detroit Tigers. Aside from that start, he has also endured his fair share of struggles this year. On the other hand, Ivan Nova has been fairly solid since joining the rotation. The Yankees will need him to pitch a good game in order to win this series.

Three players to watch for the Yankees
1. Alex Rodriguez
Alex Rodriguez has been better since returning from the disabled list. There was a point in time where the Yankees were unsure whether A-Rod would continue being the primary DH after temporarily benching him. While that is still true to a certain extent, he seems to be heating up. With a five game hitting streak and two homers since his return, Rodriguez looks to anchor this Yankees lineup as he presumably continues hitting in the 3-hole.

2. Nathan Eovaldi
A stellar month of May, Eovaldi was one of the American League's best starting pitchers. With his first start in June under his belt, he needs to get back to his May ways if he wants to replicate the success he enjoyed in May. I just wrote a piece on why it's time to jump on the Nathan Eovaldi bandwagon, so he better not force me to eat my words.

3. Aroldis Chapman
Chapman is having a good season so far with the Yankees, but he's run himself into some trouble of late. He gave Yankee fans a late inning scare in Detroit, and he also surrendered what ended up being the game winning hits in Baltimore. When he's pitching, the game should be essentially over, so he must continue living up to that reputation.
Three players to watch for the Angels
1. Mike Trout
Are the Angels wasting Trout's prime years? The LA superstar is once again having an MVP caliber season for a team that may finish in last place in the AL West. Whether he's the best player in the MLB or not is up for heavy debate, but whether he's the best player in this series or not, is not up for debate. He's the type of guy you pay to see play, so Trout's always a guy fans keep their eyes glued to when he's on the field.
2. Kole Calhoun
Kole Calhoun is an All-Star caliber player. As a scrappy guy who hits for power and does everything well, his performance can really dictate the success that his club enjoys. He's an X-factor for the Angels.

3. Jhoulys Chacin
As previously stated, Chacin recently tossed a complete game against an intimidating Tigers lineup. Chacin will get the ball against Nova in the series finale, so the Yankees need to jump on him early and often to rattle him off his high confidence level that he must be feeling after his stellar start against Detroit.

Three keys to a series victory
1. HIT WITH RUNNERS IN SCORING POSITION
The Yankees are hitting a disgusting .219 with runners in scoring position this year - the second worst in the major leagues. That has been a major issue with the team and is the cause of much of the frustration in the clubhouse and among the fan base.

2. Solid outings from Tanaka and Eovaldi
With the walking wild card of Michael Pineda pitching in game two, and Ivan Nova - who can be unpredictable at times - pitching in game four, the Yankees have to win the two games that Tanaka and Eovaldi get the start in. Then, of course, Pineda or Nova has to give the team a competitive outing to give the team a chance to win, which is not too much to ask.

3. Get 'Giving up Runs DMC' back to their normal ways of 'No Runs DMC'
The Yankees obvious strength is the three-headed monster that is Dellin Betances, Andrew Miller, and Aroldis Chapmam. The team was built with the intentions of having a lead for those three so they could come in and slam the door shut. Unfortunately - outside of Miller - they've been collectively struggling. Betances has seen his ERA balloon to 3.54 and Chapman has run himself into some trouble in his last couple outings. This shouldn't be cause for panic regarding these three, but we should be watching them extra carefully this week.

Prediction:
Like the Yankees, the Angels are not a very good baseball team. However, the Los Angeles Angels are a worse baseball team. Although LA has the star power at the top in Trout that the Yankees lack, the Yankees pitching depth should be too much for the Angels. Believe it or not, pitching in general, both starting and in the bullpen, has been a strong suit for the Yankees this year. Their success (or lack thereof) has fallen completely on the shoulders of the offense. I keep hoping that as the summer heats up, so will the Yankee bats. But I'm a skeptic. Here's to hoping they use this series to get back on track this year, or it'll be a long summer in the Bronx.