Five players the Yankees should trade at the deadline

By Unknown - June 16, 2016
The Yankees 2016 season has not gone the way many of us would have hoped. This team just can't seem to put it together. For every step forward, they take two steps backwards. It's about time we accept that the Yankees are, at best, an average baseball team. In fact, I'd even go as far as calling them mediocre. The only thing to look forward to is seeing Dellin Betances, Andrew Miller, and Aroldis Chapman pitch the late innings of a victory, and this scenario is not all that frequent. The offense has been horrendous. The rotation has been plagued by inconsistencies. As a 1990s baby, I've never witnessed a losing season in which the Yankees were out of contention by mid-summer. It's hard to accept, but in order for the Yankees to have a better future they must become sellers at the deadline. Unless they miraculously turn it around in the coming weeks, which is highly unlikely given their recent performance, the organization should actively shop many of its players. I've identified five such players who should be traded. Some are obvious names that have been thrown around for quite some time, while others may surprise you. 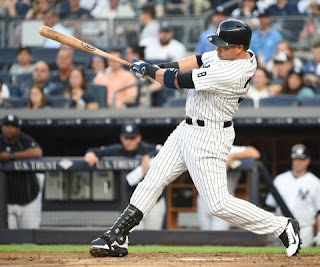 Carlos Beltran: I'd like to preface this discussion by noting my appreciation for Carlos Beltran. Although his first year and a half in pinstripes didn't go as planned, it's been a pleasure to have him in the Bronx. For much of the second half of last season, and certainly for all of this season, Beltran has carried the Yankees offense. The very fact that he's thirty-nine years old, and not only in a contract year, but also possibly the last year of his career, is an important factor to take into consideration. Beltran is one of the best postseason hitters in history. He may be limited in the field these days, but many teams in the middle of a pennant race would give up some pieces for a player of Beltran's caliber. Considering this may be Beltran's last season, although if he keeps playing this way he may want to give it a go next year, he deserves to be in a spot to finally win that elusive championship. In 2016, unfortunately, the New York Yankees cannot provide him with that opportunity. In my eyes, trading Carlos Beltran is a move the Yankees must make.

Aroldis Chapman: Perhaps the most obvious candidate to be traded on this list is Aroldis Chapman. When the Yankees acquired him this past winter from the Reds, they knew he would likely be a one year rental. Personally, I would love to see the Yankees sign Chapman to a long term deal. He's an exciting player, who is accompanied by a certain aura whenever he steps on the mound. Unfortunately, ownership has indicated these last few years that they have no interest in spending money. That being said, Chapman could net the Yankees a very desirable return. He's the only player on this list who could actually bring back some top prospects. Chapman could put many teams in the midst of a pennant race over the top. For example, the Nationals recently lost Jonathan Papelbon to injury. Chapman could very likely hand them the NL East title. In an ideal world, I would trade Betances. He is by far the weakest link of our big three at the backend of the bullpen. He is under control for quite some time so this could potentially net the Yankees a substantial return as well. I'm aware this likely wont happen, however I thought it was worth mentioning.

Ivan Nova: Putting his recent start against the Rockies aside for a second, Nova has pitched surprisingly well this season. He has consistently given us roughly six innings of three run ball. While there's nothing impressive about these numbers, it's surely solid for a number five starter. With pitching at a premium, some teams may be willing to give up a lower level prospect or two for Nova. The Yankees likely won't be resigning Nova once he becomes a free agent at the end of the year anyway. With the way this season has went, it would be in the Yankees best interests to trade sell as many pieces as possible in July. Nova is by no means a difference maker, but he can provide a contender with a solid arm to help round out their rotation.

Brett Gardner: I'm expecting to get some blow back from the Gardner lovers on Twitter, but this must be said. I've been advocating for the Yankees to trade Gardner for the last two years now. I even had the unpopular opinion of suggesting we sell high on him after his all star first half last season. In hindsight, wouldn't that have been a great idea? In an ideal world, I'd like to trade Jacoby Ellsbury, however his contract makes that almost impossible. Brett Gardner is one of the streakiest and most frustrating players to watch in all of baseball. That being said, he could be valuable to a number of teams. Gardner is under contract until the end of the 2018 season, and he's quite affordable. Gardner would be a solid addition for any team looking for outfield help. He's a fierce competitor and great defender. That being said, he has some glaring flaws, but for the sake of this article I won't delve further into those. Needless to say, unloading Gardner's contract could help pave the way for some of the younger guys to get playing time so they can show us what they're really made of. Gardner may have been a good Yankee, but his time in pinstripes should come to an end.

Brian McCann: My issues with Brian McCann are well documented. Click HERE to read an extensive piece discussing such issues. I think it's fair to say that McCann has fallen short of the expectations we set for him prior to his arrival. That being said, McCann is a great defensive catcher, and solid clubhouse guy. Despite his inability to hit the ball the other way, McCann can still be counted on for roughly twenty home runs and seventy five RBIs each season. Due to his contractual obligations, the Yankees shouldn't expect to get much out for him. I don't foresee McCann being traded, but I thought the possibility was worth mentioning. If the Yankees were to find a possible match, they should swing the trade. McCann represents everything that is wrong with this Yankees offense. He is a pull happy hitter who cannot hit to the opposite field. This approach inhibits the team's ability to manufacture runs.

My fellow Yankees fans, the time has come to accept that our beloved team is not very good this season. Regardless of how they perform these next few weeks we should still be looking to sell. This team is nowhere near close to championship caliber. We are in the midst of a transition. The best thing to do right now is sell off as many players as possible and build towards the future. Although this reality is painful to face, it is absolutely necessary for the future well-being of the franchise. Continuing to believe in a mediocre baseball team will do us no good. We learned that the hard way the last three seasons. Becoming sellers this summer may not be good for the Yankee brand in the short term, but it will certainly go a long way towards improving it in the long run.