How the Yankees should deal with Alex Rodriguez

By Unknown - June 23, 2016
It's become painfully apparent that Alex Rodriguez is no longer the player he once was. Last year, he shocked the baseball world with the numbers he put up. His 33 home runs led the team, while his 86 RBIs were second on the squad. As we remember, A-Rod's first half numbers were far better than those he put up in the second half. As one of his biggest fans, and consequently apologists, it's been tough for me to accept that Alex Rodriguez may be done. I thought his second half struggles last season were simply the result of an overworked forty-year old body. Unfortunately, his performance thus far in 2016 has essentially undermined that theory. The Yankees should give A-Rod every opportunity possible to straighten himself out; however, if he cant, they should seriously consider cutting him loose, even if that means being on the hook for the exorbitant amount of money he's owed over the next two years. 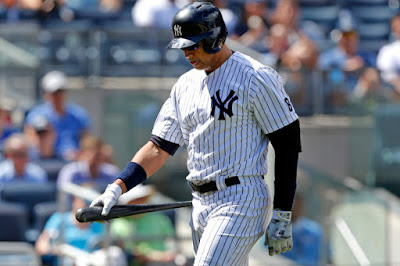 The Yankees entered the 2016 season with many question marks, one of which being whether or not the offense could be carried by the same veterans that were so successful in 2015 (at least in the first half). Fortunately, Carlos Beltran has been a godsend. Mark Teixeira, currently on the disabled list, was awful before he got injured so the Yankees haven't gotten much out of him. Teixeira's injury made Rodriguez's performance all that more important. Thus far, the Alex Rodriguez we've seen has not come anywhere close to resembling the player who had everything in the world to prove coming off his 2014 suspension. Instead, he seems completely lost at the plate.

Whether you like him or not, Alex Rodriguez is one of the best players to play the game of baseball. Putting the steroid argument aside for a second, he's a tremendous talent. In fact, I would argue he was a border line prodigy in his younger days. I'd rather not argue the merits of this point, but I thought it was worth mentioning. Simply because of his track record, many fans have held out hope that he'd eventually turn it around, myself included. The more I see from Rodriguez, the more difficult it is to sustain any level of optimism. Tuesday's game against the Rockies was a case in point. With runners on first and second and one out in the bottom of the eighth inning, A-Rod struck out swinging. While he may have a reputation for choking in the clutch during his time in pinstripes, during this at-bat A-Rod looked hopeless.

I understand it's only mid-June, and some fans may think I'm overreacting, however the lack of offensive production from a key component of our lineup is deeply troubling. Pretty soon we will know whether or not the Yankees will approach the trade deadline as buyers or sellers. I've consistently argued that regardless of their performance in the coming weeks the Yankees should still sell off as many tradable assets as possible. The front office, on the other hand, will likely use the team's performance over the next few weeks to make that determination. It wouldn't be a stretch to say that whether or not A-Rod produces will have a bearing on such a decision.

I have no doubt in my mind that Joe Girardi will continue running A-Rod out there everyday simply because he has no choice. Sure, he may opt to drop him lower in the lineup, but that won't have a consequential impact on the offense. In fact, it could mess with Rodriguez's confidence and further his struggles. He's making $20 million this season, and unless the Yankees eat the contract, which in all likelihood won't occur, we're stuck with him. Now, since we've went over the facts, I'd like to offer what the Yankees SHOULD do.

If I were running the show, I would give A-Rod an ultimatum. I'd tell him that if he doesn't produce in the next month or so he will be bought out. Alex Rodriguez has been playing baseball for over twenty years. He is a consummate professional who is aware of the demands that come with putting on a Yankees uniform. Due to his past transgressions, the Yankees do not owe him anything, unlike Derek Jeter, who they will forever be indebted to. With the pressure on his back for the first time in a long time, maybe A-Rod will be motivated to turn it around. If he can't, then we'll at least know he doesn't have anything left in the tank.

Of course, there is one thing the Yankees have to gain from keeping even a struggling A-Rod around. As of now, Rodriguez is fourth on the all-time home run list with 695. Even if he continues playing the way he has thus far, he will almost certainly reach 700 by year's end. If he were to play out his contract next season, he'd likely pass Babe Ruth's 714 mark. Both of these milestones would be marketing opportunities for the Yankees. Due to the sharp decrease in attendance as of late, the Yankees must have this in mind. They'll do anything these days to fill up that ghost town of a stadium. Whether or not cynical motives are at work in this situation is not something I'd like to discuss further, but I thought it was noteworthy enough to briefly discuss.

Unlike Beltran, who has been a one-man wrecking crew this season, A-Rod has no value whatsoever. The only team I can think of having even a slight interest in Rodriguez is the Marlins due to his Miami connections. Even that, however, would be a stretch. The Yankees can either continue to play a guy who has essentially become an automatic out, or they can cut their losses and allow the younger guys to play. When Teixeira returns from the disabled list, Rob Refsnyder will be without a position, so he could slide nicely into the DH role. Beltran, no longer the fielder he once was, would be an ideal DH as well, if he's not traded of course. This move would allow the Yankees to finally call up Aaron Judge.

As one of the biggest A-Rod apologists around, it has been rather painful to write this piece, but it had to be done. Whether we like it or not, Alex Rodriguez is no longer the player he once was. The fountain of youth, or whatever it was, that powered him during the first half of 2015 has clearly run its course. The Yankees are now faced with a tough decision. They could either continue to play Rodriguez on a regular basis, and subsequently take playing time away from players in need of development, or they could eat the roughly $40 million left on his contract and cut their losses. I'm hoping A-Rod turns his season around and makes this a non-dilemma for the Yankees, but the chances of this happening are becoming slimmer by the day.