It's about time we stop giving Brian McCann a free pass

By Unknown - June 10, 2016
Heading into the 2013-14 offseason, the Yankees were in desperate need of a catcher. Following the departure of Russell Martin, the 2013 Yankees essentially instituted a catcher by committee system. Having to see Chris Stewart as the everyday catcher for much of that season was quite a grueling experience, to say the least. Due to the lack of production from the position, Brian Cashman generously handed perennial all-star Brian McCann a five-year eighty-five million dollar contact. While McCann has been solid behind the plate, he's underperformed offensively. McCann's power numbers have undoubtedly been aided by the short porch in right field, however this one advantage has been detrimental to his overall offensive production. The temptation of the short porch has turned McCann into a pull hitter, thus making it easy for opposing teams to shift whenever he's at the plate. For the last few years McCann's struggles have not been given the attention they deserve. His failure to push aside his pull happy mentality is hurting the team. Whether it be stubbornness, lack of effort, or a combination of both McCann must start hitting the ball the other way. If not, he'll continue to exist as deadweight at the middle of our lineup. 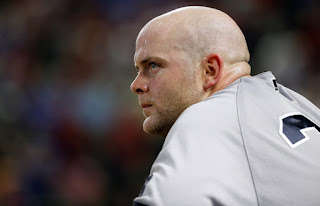 Photo Credit: (Tony Gonzalez | AP)
With McCann, the Yankees were expecting to have a solid contributor in the middle of the lineup. Although this hope has materialized for the most part regarding power numbers, his approach at the plate has been deeply troubling. The pre-2013 Yankees could afford to have quite a few players with McCann's mentality and still get by because of their dynamic lineups. With players such as Johnny Damon, Derek Jeter, and Robinson Cano, just to name a few, who possessed the ability to not only produce runs, but also get on base and set the table for the middle of the order, having players with "home run or bust" approaches was not as detrimental as it has been the last couple of years.

McCann has had his clutch moments while in pinstripes. I attended the game last July against the Rays where he hit an extra inning walk off in the bottom of the thirteenth inning, although I regrettably decided to leave the inning before. Nonetheless, his ability to occasionally perform in clutch situations does not excuse his otherwise subpar offensive production. In both 2013 and 2014, his first two years in New York, McCann hit .232. I can further analyze McCann's offensive numbers, however that would make this critique much more lengthier than I had originally intended. If you feel the need to look at the rest of McCann's offensive statistics, you can click here to see the aforementioned statistics.

Prior to coming to the Yankees, McCann was an all around solid player for the Atlanta Braves. His defense has been superb, as expected, however the fall off in average is quite disturbing. We've seen players come to the Bronx and struggle as a result of becoming too pull happy. Curtis Granderson is the quintessential example of this phenomenon. In 2011 and 2012, Granderson became rather pull happy, and this became a detriment to the team's success. With Granderson, it essentially became home run or strikeout every time he was at the plate. Yes, this is a hyperbolic statement, but it accurately conveys the reality of the time. This was excruciatingly painful to witness. Although McCann has done a better job at making contact, he seems to have fallen into the same trap.

Some players simply become too tempted by the short porch in right field that they cannot, or stubbornly will not, hit the ball the other way. After Granderson departed for the Mets, he became a completely different player. Without the temptation of the short porch, Granderson reverted back to the dynamic player he was in Detroit prior to his trade to the Yankees. Interestingly enough, after signing with the Mets he was reunited with Kevin Long, who many fans blamed for this pull happy approach. So maybe the blame shouldn't rest with solely the hitting coach.

I'd now like to shift gears back to McCann. After this season, he's under contract for the next two years. Unless the Yankees decide to have a fire sale and miraculously move him at this year's trade deadline, as they should, we're stuck with McCann for the duration of his contract. The Yankees brass should be insistent that he change his approach at the plate. The predictability of McCann's approach has led to me to call him a "walking pop up." It's painfully obvious that he's cognizant of his struggles. He likely believes the only way to overcome defensive shifts is to hit it over their heads and into the stands. While this is certainly correct, it will not happen very often. A much more effective remedy would be for him to make better use of the other sides of the field.

As a fan, it's extremely frustrating to watch McCann come to the plate in a big spot with runners in scoring position and pop up to the second baseman. It's even more frustrating when the entire left side of the infield is wide open. Simply dragging a bunt down the third base line would be more than sufficient to get a runner home from third. Consistently hitting the other way may also force other teams to adjust the shifts they employ against McCann. Even if they don't, he should take advantage of what, if done correctly, amounts to an easy base hit. The very fact that he hasn't attempted to do this more is disconcerting, and may raise questions about his dedication to the team. I may be going too far with this suggestion, however failing to even attempt to do something that will likely assist the team is quite a selfish move.

Brian McCann is a huge part of this Yankees team. He was signed two years ago to be a leader, and produce in the middle of the lineup. While his power numbers have been helped by the short porch, he's become an overall less productive offensive player. Unless McCann changes his approach at the plate, we can expect to see more of the same on his end. While three-run home runs are always a welcome sight, sometimes a base hit would be just as helpful. Perhaps my problems with McCann wouldn't be as profound if he was doing everything within his abilities to rectify them. Unfortunately, this does not seem to be the case. Joe Girardi, Alan Cockrell, and the rest of the coaching staff should put more pressure on McCann to break out of his very bad habit. Just because the shift is to blame for his aggregate offensive struggles doesn't mean he's exempt from subverting this obstacle. McCann may have had some nice moments as Yankee, but his stubborn approach at the plate has prevented more of those moments from occurring. As Yankees fans, we love to scapegoat certain players who have struggled, such as Chase Headley. It's puzzling to me that more criticism hasn't been launched in McCann's direction.

Connect with me on  LinkedIn!