By Unknown - June 11, 2016
On a warm Saturday night, Ian Kinsler singlehandedly led the Tigers to a 6-1 win with a 5-RBI night. The Yankees offense couldn’t get anything going after scoring 33 runs in the last five games, and Masahiro Tanaka’s two mistakes both resulted in home runs. The Tigers also snapped the Yankees five-game winning streak, and with the loss, the Yankees returned back down to .500. 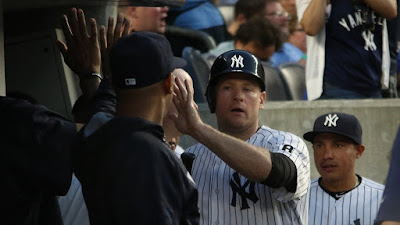 In the top of the second, Nick Castellanos got the scoring started with a solo homer to center, but Chase Headley came right back with what should have been a homer, but instead was ruled a triple. Rob Refsnyder’s RBI single eventually drove Headley home and tied the game at 1.


In the fifth, Ian Kinsler came up with two runners on and the game tied at one, and on the very first pitch of the at-bat, Kinsler deposited Tanaka’s misplaced slider into the left field seats for a line-drive homer around the foul pole. That three-run homer made it 4-1, and he added a 2-RBI double off of Kirby Yates in the seventh to solidify the Tigers win.

Both Tanaka (3-2, 3.08 ERA) and Justin Verlander (6-5, 3.77 ERA) pitched well, but Verlander was able to limit the Yankees offense to just one run over 6.2 innings. Tanaka, meanwhile, allowed six hits and five earned runs (one came with Kirby Yates on the mound in the seventh).

After allowing another run tonight, Kirby Yates has seen his ERA rise from 1.96 (May 24) to 3.80. He’s given up five earned runs and seven hits in just 3.2 innings in June.

Nick Goody and Richard Bleier each pitched a scoreless inning. Bleier hasn't allowed an earned run yet in the Majors.