By Unknown - June 04, 2016
Let me preface this by stating there is nothing I would like more than to be proved wrong by seeing the Yankees go on a championship run this season. Having this article become the laughing stock of the internet would not bother me if that were to be the case, however the probability of the aforementioned event occurring is slim to none. I hate to be blunt, but someone has to say it: THE 2016 YANKEES ARE NOT GOOD. Thus far, they have been an unmitigated disaster. Never in my life have I seen a Yankee team so apathetic and lifeless. Even the 2013 and 2014 clubs, who were for the most part bereft of talent, at least displayed a certain level of fight. The 2016 team, on the other hand, doesn't seem to care. Perhaps even more troublesome than the attitude and performance of the players is the reaction displayed by management. First and foremost, I'm sick and tired of Joe Girardi's "it's not what you want" routine after every loss. It's painfully clear that he can no longer motivate this team and must go. Brian Cashman, the architect of this very bad ball club, should also be relieved of his duties. Hal Steinbrenner's complacence with losing, and lack of a desire to rectify this team's glaring weaknesses makes me pessimistic about the long-term future of the Yankees. This is going to be a fairly long read, so get ready to channel your Yankees frustrations. 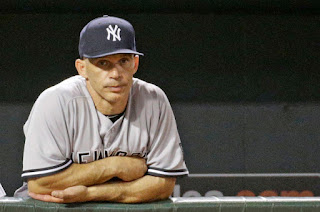 
No, this is not an overreaction. What I am writing is an honest assessment of what the 2016 New York Yankees really are: a mediocre baseball team. Since 2012, the Yankees have been "fake contenders," meaning they've given off the perception of contending, although they haven't had a serious shot at winning it all. They've been able to stay in the playoff hunt long enough to somewhat appease a fan base that has historically been hungry for winning. In 2015, despite having as much as an eight game division lead up prior to the trade deadline, we all knew a crash was imminent. As it turned out, the complacent philosophy employed by Hal's regime led to the abandonment of what could have been a promising playoff run. In 2016, on the other hand, this facade is no longer feasible. It's becoming clear that the Yankees have a number of holes, most notably a stagnant and anemic offense. Surprisingly, the pitching hasn't been too bad, however the offense's inability to manufacture runs is excruciating to watch.

As I write this, the Yankees sit at 25-29, leaving them 6.5 games out of first place in the AL East. Don't get me wrong, this deficit is by no means insurmountable, but do we realistically expect the Yankees to suddenly turn it around? Aside from their very brief six-game winning streak, the Yankees have been consistently mediocre. This is what we should expect for the duration of the 2016 season. For this obvious reason, the Yankees need to abandon their "fake contending" approach, and become sellers at this year's trade deadline. Even if they are hovering around .500 for most of the season, and within reach of a playoff spot, they will still be nowhere close to a championship contender. The goal of this organization is simple. Every year that we do not win a championship is considered a failure. This should not change. As fans, it's difficult for us to sacrifice our pride in favor of common sense, however the only way to save the franchise to build for the future.

Carlos Beltran has been one of the few players on this team to perform consistently well offensively this season, but he's in a contract year at the age of 39. Due to his performance thus far, and the very fact that he's one of the best postseason hitters of all time, he should bring back a decent return. Although Beltran has been great, he is of no use to a team that has no shot at making a deep playoff run. This would also allow the Yankees to call up Aaron Judge, who is line to become one of the franchise's future cornerstones. Aroldis Chapman is as exciting as they get, and even though we may not want to see him go, he can bring back a hefty return. I would personally extend Chapman and deal Dellin Betances, but for the sake of this article I won't digress and delve further into that argument. Besides Chapman and Beltran, the Yankees don't really have much to offer other teams. Brian McCann is due a significant amount of money for the next few years so moving him would essentially be a salary dump. Mark Teixeira, now on the DL, has been pitiful this season. Brett Gardner hasn't hit too well either, although he could prove useful to a number of teams. Needless to say, the Yankees have to make some moves instead of continuing their trend of deception.

Now, it's time to be even more blunt. The Yankees offense, with the exception of Beltran, Starlin Castro, and I guess Jacoby Ellsbury has been abhorrent. Teixeira and A-Rod have forgotten how to hit. Chase Headley is useless with a bat in his hand. Everyone else loves to swing for the fences with runners in scoring position, instead of meticulously manufacturing runs. For much of the season, Joe Girardi has maintained that this is not what the Yankees really are. Well guess what Joe, this is what the Yankees really are! It's time to wake up and start calling players out for their lack of effort, or unwillingness to change failed approaches. Some people, including a few here at the BBB, have advocated for firing hitting coach Alan Cockrell. While I wouldn't be opposed to this move, how many times can you fire the hitting coach and expect different results? The Yankees fired Jeff Pentland after last season, and the offense has gotten worse. After being fired by the Yankees two years ago, Kevin Long has helped lead an exciting Mets offense on the other side of town. There's no way to sugarcoat it. The Yankees have to fire Joe Girardi if they want to win again. His message is clearly no longer getting through to the players. This, in conjunction with his mismanagement of the bullpen, have proved disastrous. I could write an entire article about Girardi's shortcomings as a manager, and as a matter of fact I have, but I shall not digress.

Perhaps the most disturbing part about this entire ordeal is Hal Steinbrenner's attitude. I became instantly infuriated after reading about a recent interview Steinbrenner had with ESPN.com, in which he stated of the Yankees struggles, "I don't think it's a flaw in the way the team is put together. I think the team we have this year is better than the team we had last year." I couldn't help but think to myself, really, Hal?! The problem with this team is exactly what you just said it's not! This team's conspicuous strength, the back end of the bullpen, is contingent on it's weaknesses performing. Without the inconsistent starting rotation and anemic offense performing well, (no run) DMC won't even get the opportunity to flourish. The argument presented by our owner is completely asinine in that regard. He also called out two players: Mark Teixeira and Michael Pineda. While I applaud him for this, his decision to place zero blame on Girardi and Cashman is unacceptable. Where is the accountability?

I've already discussed my issues with Girardi, however Cashman has even more responsibility for the team's recent failures. Despite having a plethora of starting pitching talent, and a weak starting rotation, the Yankees decided not to make any moves in this regard. That has clearly proven to have been a huge mistake. With the resources available at his disposal, having one championship in fifteen years is unacceptable. I'll admit that while he's had a number of good trades recently, which landed Nathan Eovaldi, Castro, and Chapman, amongst others, his free agent signings have been disproportionately bad, dating back to Carl Pavano and Jaret Wright. Let's not forget, this is the man who gave Chase Headley, who has essentially become an automatic out, fifty-two million dollars!

As much as it hurts me to say this, the Yankees must cut their losses this year and become sellers when the time comes in July. We should also call up the kids and allow them to play. I'm not expecting the Yankees to be good again until at least 2018. With A-Rod and CC Sabathia's contracts coming off the books in 2017, and the depth of the 2018-2019 free agency class, the Yankees should be in a prime position to assemble a new dynasty, although with Hal's frugal tendencies this might also be too optimistic of a thought. It's become painfully obvious that the 2016 Yankees would be lucky to finish over .500. Just when we thought they had turned it around, they instantaneously came plummeting back to down to Earth. Unfortunately, this team has already showed us what they are capable of, and that is not much. Trading the veterans with trade value, along with giving the younger guys more playing time will help this franchise in the long run. As Yankees fans, the last thing we want to hear about is going into rebuilding mode, yet as realists we must accept this is as necessary for future successes. I will conclude by posing an interesting question. As a fan, would you prefer to continue being fed false hope about possibly contending, or would you rather understand the reality of the situation to avoid further frustrations?

As the Yankees head down the final stretch of the regular season they will look to their minor league system for reinforcements to help them close out the year. They could activate up to 40 players but most likely will only call up a couple of guys. Here is a list of some of the players who could get the call:
Clint Frazier: The time has come for Frazier to finally return to the Yankees. He has spent most of the season in the minors after struggling defensively but his bat will help the Yankees close out the season. In 53 major league games this year Frazier slashed .283/.330/.513. Frazier could get at bats at DH while the Yankees wait for the return of Luke Voit, Giancarlo Stanton, and Edwin Encarnacion.