By Unknown - June 21, 2016
Ivan Nova and Colorado Rockies starter Chad Bettis (5-5, 5.44 ERA) both had something in common in tonight’s 8-4 loss. Bettis got the win and Nova took the loss, but both threw games that were very similar to their last starts, against each other. 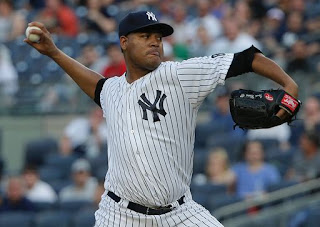 Colorado’s potent offense once again flexed their muscle tonight, as they out slugged the Bombers. Charlie Blackmon kicked things off with a solo bomb and later hit his second home run of the game. It was the beginning of a rough night for Yankees starter Ivan Nova (5-5, 5.18 ERA), who would give up 5 earned runs and eight hits in four innings of work, very similar to his last start against Colorado. Nolan Arenado hit a two run homer in the 6th and gave the Rockies an 8-3 lead.

New York’s offense showed some signs of life but couldn’t do much, as Colorado’s lead became for them, insurmountable. The Yankees went 0-10 with RISP, and the bottom of the order didn’t help the cause, going 2-12. Brett Gardner had a great night collecting two base hits and two walks. Didi Gregorius also had a solid night at the dish, going 2-4 with a double, triple and an RBI. 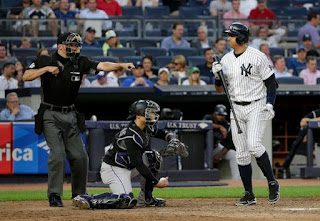 Nick Goody relieved Ivan Nova and collected four strikeouts in 1.1 innings, but gave up two earned runs. Richard Bleier made an appearance and did well, allowing just two hits and collecting two strikeouts in 1.2 innings of work. Anthony Swarzak pitched the 9th and struck out the side.