Now is the time to kick it into gear

By Unknown - June 14, 2016
There has been much debate as of late regarding whether or not the Yankees should be sellers this July. The next eleven games will be played against the Colorado Rockies and Minnesota Twins. Both of these teams are not very good. While the Rockies have hovered around .500, the Twins are flat out atrocious. Fortunately, the Yankees play four of these games against the Rockies, and seven against the Twins. Let me reiterate: SEVEN against the Twins. The Twins are by far the worst team in the American League. There is no excuse for the Yankees to not win at least five or six of those games, though at least the latter would be preferred. Against the Rockies, they should take three. These eleven games should help elevate the Yankees to an above .500 team. This is much easier said than done. Needless to say, if the Yankees don't go on some type of run this next week or so they should become sellers come July. After all, if they can't beat the Rockies and Twins, who can they beat? 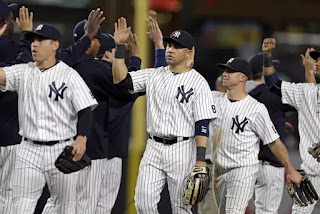 
The more I watch this Yankees team, the less confident I get regarding their 2016 prospects. Having just returned from four weeks in Florida, I didn't have the opportunity to watch the Yankees as much as I would have liked to. I did return just in time for their series against Detroit this past weekend in the Bronx. After seeing the resurgent CC Sabathia shut down the Tigers on Friday, I became overly optimistic. The offense even gave him four runs to work with. Those hopes were shattered on Saturday and Sunday after the Yankees, despite decent starting pitching, once again could not get anything done offensively. The unpredictability of this team has probably been the most frustrating thing for me to cope with this season. Are our players simply underperforming, or are they just not very good?

In an earlier article, I alluded to the notion of fake contending. The Yankees have done this from 2013-2015. Although those teams had no legitimate shot at winning a championship, they stayed in the race long enough to garner some interest from the fan base. Due to this fake contention, the Yankees front office was able to continue making money off of a subpar product on the field. This season, however, we may have finally hit a breaking point. Despite showing signs of finally putting it together, this Yankee team seems to take two steps backwards for every step forward. I will give them credit for pulling themselves close to .500 after a horrific start to the season, but I'm not sure if they're much better than a subpar baseball team.

We know the bullpen, or at least three of its components, are deadly. We also know that the starting rotation has been much better than many of us would have expected heading into this season. Interestingly, what initially appeared to have been an obvious weakness may be turning into an unappreciated strength. The other side to this equation, unfortunately, has been the performance of the offense. What many thought was solid heading into the season, has been a disaster of epic proportions. Players the Yankees needed to perform this season- Mark Teixeira, Alex Rodriguez, and Brian McCann, just to name a few, have not played consistent with their paychecks. Fortunately, Carlos Beltran has been a godsend, but we can't depend on him to carry the team moving forward. The very fact that it's mid-June and no other player, besides Starlin Castro early on, has stepped up is rather disconcerting.

Good baseball teams beat bad baseball teams. This is very easy to understand. I would hope the Yankees can put together some sort of winning streak this week. If they do, they'd be in a prime position to make even a moderate run. I am conflicted with whether or not I want to see them succeed during this stretch though. If the Yankees can consistently stay roughly 5-10 games over .500, they will definitely not be sellers this year. In the event they are sellers, the rebuilding process will help us moving forward. On the other hand, if they chose to stand pat, or perhaps even add a few complementary pieces, they may have a shot at the AL Wild Card Game. I'm not sure I'd want to see this team further jeopardize the future for only a shot at the wild card game. With how they've performed in recent years, we could expect nothing short of a choke. But, before I digress further, I must shift back to the topic at hand.

The Yankees are currently at a crossroads. Their performance these next eleven games will be essential when it comes to evaluating whether or not they have what it takes to compete this season. Those Yankees apologists who have been urging patience for much of this young season must be running out of excuses, or at least I would hope the reality of the situation should hit them very soon. If the Yankees cannot beat bad baseball teams, they will not go far. Even if the Yankees surprisingly do well during this stretch, that will not ensure anything. They could still underperform yet again when the Texas Rangers come to town in two weeks. Although a successful Yankees performance these next eleven games won't necessarily cement their status as contenders, a mediocre performance can, and most likely would, sink this team for good. If the Yankees are still struggling to get over .500 come June 27, they should seriously consider being sellers this July. Nothing this team has showed us thus far can provide much optimism moving forward. It's about time they start winning the games they should be winning. This starts in Colorado.