By Unknown - June 05, 2016
After a 97-minute rain delay, the Orioles rallied off of Aroldis Chapman to secure a 3-1 win in the series finale on Sunday. With the bases loaded and two outs, Matt Wieters came in to pinch-hit and sent Baltimore fans home happy with a 2-RBI single up the middle, with a third run scoring on a Jacoby Ellsbury throwing error, which was mostly caused by Chapman not backing up Brian McCann at home. 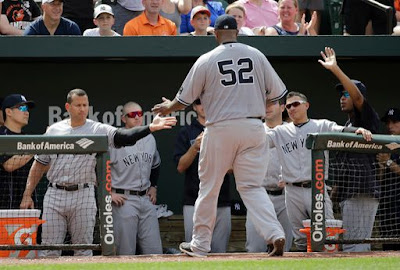 Coming off of four starts in May where he pitched to a 1.04 ERA, CC Sabathia labored through five innings, allowing just two hits, six walks, and zero earned runs on a season-high 111 pitches. Sabathia worked out of a bases-loaded jam twice, in the third and the fifth, and did it each time by striking out Mark Trumbo. Meanwhile, Alex Rodriguez provided the only offense the Yankees needed with a RBI single in the third inning. 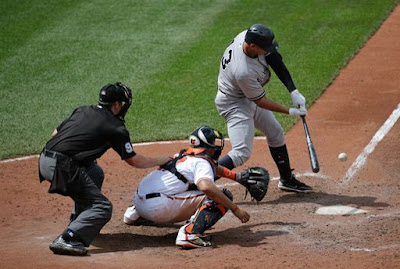 
The Yankees had their fair share of opportunities to score. In the fourth, the Yankees could not score with the bases loaded and one out. In the seventh, with A-Rod and Gardner on second and third, respectively, and two outs, Brian McCann flew out to right and stranded two RISPs.

Dellin Betances continued to struggle, and he’s now allowed at least one earned run in each of his last four outings. Kirby Yates continued a fine 2016 campaign with a scoreless inning.

Zach Britton picked up his 17th save of the season with a 3-up, 3-down ninth for the Orioles.

The Yankees head back to New York tomorrow for a four-game series against the Los Angeles Angels. Masahiro Tanaka (3-1, 2.78 ERA) will start against Matt Shoemaker of the Angels (3-6, 5.50 ERA).