By Unknown - June 09, 2016
Despite Chris Parmelee’s injury in the seventh, the Yankees completed a four-game sweep of the Los Angeles Angels with a 6-3 win. Nova’s bounce-back outing, along with a five-run fifth inning, were the differences in Thursday’s win. 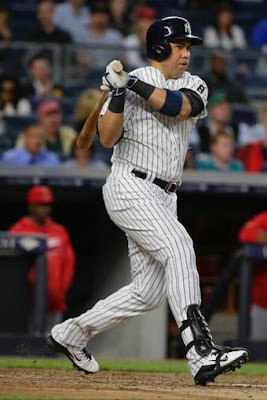 
After the Yankees struggled to score in the first four innings tonight, it looked like the offensive outburst from last night was a fluke. The Yankees offense returned to what has haunted them all season, and that’s failing to take advantage of opportunities with runners in scoring position. Brett Gardner was picked off for the third out in the first. In the second, with one out and runners on second and third, both Chase Headley and Chris Parmelee struck out.

The Yankees offense broke through in the fifth, first on a Chris Parmelee RBI single to left center that scored Didi Gregorius to tie the game at one. Beltran followed with a 2-RBI ground-rule double to right, scoring Parmelee and Ellsbury. After A-Rod made it 4-1 with a sacrifice fly to center, Brian McCann’s opposite-field RBI double to left made it 5-1. The offense was able to tack on another run on an A-Rod RBI double in the seventh.

Coming off a shaky start in his last outing, Ivan Nova (5-3, 4.39 ERA) returned to form with a strong start, giving the Yankees 6.1 strong innings, and he allowed just six hits and struck out five. With a rested Betances, Miller, and Chapman, Joe Girardi went to the formula after Nova gave up a two-run homerun in the sixth to Jefry Marte. Betances came in for the final two outs in the seventh to preserve the 5-3 lead, and Andrew Miller earned his ninth hold of the season with a scoreless eighth. Aroldis Chapman pitched a scoreless ninth for his 11th save of the season.

Alex Rodriguez's RBI double in the seventh added an insurance run to make it 6-3. That was his 21st RBI of the year and 7th RBI in his last seven games.

After two outstanding performances in his first two games as a Yankee, Chris Parmelee was helped off the field after hurting his hamstring, while stretching to catch Didi Gregorius’s throw from shortstop in the bottom of the seventh. 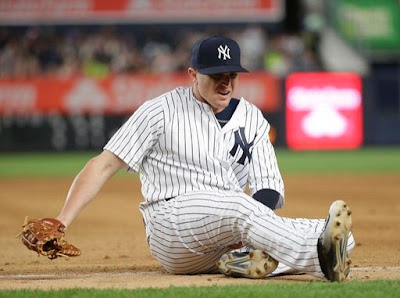