By Unknown - June 18, 2016
The days where you could expect to see many Yankees on the All-Star team are in the past. I long for the days when most, if not all, of the Yankees infield would either be starting for the American League, or found amongst its reserves. For a few years, Alex Rodriguez, Derek Jeter, Robinson Cano, and Mark Teixiera were fair bets to make the squad. At this point, we'd be lucky to see even two players represent the 2016 team in San Diego this July. I know it's quite early, however I thought it would be interesting to take a look at some of those potential All-Stars. In what has otherwise been a disappointing 2016 season, it will be nice to give credit to some of our unsung heroes. 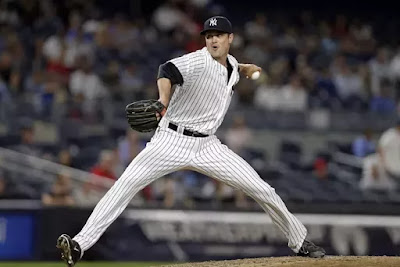 
Andrew Miller: In 2016, Andrew Miller has flawlessly made the transition from dominant closer back to dominant set up man. Following the acquisition of closer Aroldis Chapman, Miller graciously volunteered to slide back into the set up role he occupied before coming to the Yankees last season. Had Miller not gotten injured in 2015, he likely would have joined teammate Dellin Betances in the AL's bullpen. As has been the case for Miller since he got to New York, he's carried himself in as professional of a manner as possible. He's quietly put up stunning numbers. While Chapman was serving his thirty game suspension early on, Miller continued where he left off as closer last season. In what has been a less than dominant showing from Betances thus far, Miller has stepped up as arguably the most reliable of the three-headed monster. He's struck out 53 batters in less than 30 innings, while putting up a 1.26 ERA. Thank God Brian Cashman didn't trade him this offseason! Needless to say, if there's one player who truly deserves an All-Star nod on this team, it has to be Andrew Miller (Click HERE for more on Miller's statistics).

Carlos Beltran: There's no doubt in my mind that Carlos Beltran has been the Yankees 2016 MVP. Without Beltran, the Yankees likely would be many games under .500 and sitting alone at the bottom of the AL East. When in need of a clutch hit, the Yankees have been able to count on Beltran this season. If the Yankees struggles continue, they may choose to move Beltran later in July, however we should savor every moment he has left in the Bronx, if this indeed turns out to be the case. It's even more impressive that he's putting up such monster offensive numbers at age thirty-nine. This offseason, Beltran even hinted that 2016 may be his last season in the majors. Thus far, Beltran leads the Yankees in home runs and RBIs, with 17 and 46, respectively, and it's not even close. As far as the American League is concerned, Beltran ranks sixth in both categories. I expect my fellow Yankees fans to vote for Beltran as much as possible, but he likely won't be starting on July 12. That being said, he should almost certainly be amongst the reserves. Beltran's tremendous season thus far, in conjunction with his status as a potential hall of famer, would make leaving him off the squad a travesty (Click HERE for more on Beltran's statistics).

CC Sabathia: Coming into the 2016 season, who would have thought that CC Sabathia would have pitched himself into All-Star consideration? I'm not saying Sabathia should be on team, however he certainly deserves fair consideration. After showing some promise following the addition of his new knee brace last September, Sabathia has officially turned back the clock. His performance as of late has been reminiscent of the dominance he exhibited from 2009-2012 in the Bronx. I'll admit that I've been one of Sabathia's harshest critics the last few seasons, but he has completely silenced me this season. Sabathia has gone from lucky to be in the rotation to an integral part of the team. Besides Masahiro Tanaka, who I will discuss next, Sabathia has been the team's best starter. His 5-4 record is more indicative of the lack of run support he's received from an anemic offense, but the rest of his numbers are quite telling. In his eleven starts, he's pitched to a 2.20 ERA. I'm still in shock and disbelief at how impressive Sabathia has been. There may be other pitchers who deserve it more than Sabathia, however if he continues his string of dominance, he'll have made a compelling case for consideration (Click HERE for more on Sabathia's statistics).

Masahiro Tanaka: Similar to my attitude toward Sabathia, I've been rather tough on Tanaka over the last couple of years. He had been paid to pitch like an ace, but his performance has not matched his salary. He'd simply been okay, not great. Fortunately, he appears to have turned a corner in 2016, and reverted back to his early 2014 dominance. Tanaka and Sabathia have been anchors for an otherwise inconsistent rotation. Tanaka is 4-2, but also like Sabathia, his record is not indicative of his overall performance. For most of the season, he's been the victim of a lack of run support. I personally believe Sabathia has done more to deserve All-Star consideration than Tanaka, however that is subject to change. Both pitchers have certainly pitched at an above average level. As previously stated, both Tanaka and Sabathia may not make the team simply because others have been better (Click HERE for more on Tanaka's statistics).

Aroldis Chapman: Of course, I cannot leave Mr. Chapman off this list. Chapman may have missed the first twenty-nine games, however he is by far the most exciting player on the roster. A 2.25 ERA is uncharacteristically high for Chapman, although, in fairness, he has a considerable amount of time to bring it down. The 2016 sample size may be too small to make a fair judgment, but due to his stature he has to remain in the conversation. Leaving a guy who can throw 100+ MPH off of the All-Star team would not be a smart move for MLB. He's simply too exciting of a player to miss. We have a few weeks until rosters are announced so if he dominates, he should find himself on the team (Click HERE for more on Chapman's statistics).

The only players on the Yankees roster who merit All-Star consideration are the five listed above. Although we'd be lucky to see even two of them make the team, I think a compelling case can be made for all five. In what has been a disappointing 2016 campaign, there have been a few bright spots, as identified above. Do you agree with my potential All-Star picks? Or, are there certain players I left out? Let us know!