Rangers use series of lucky bounces, five-run 8th to win 7-1

By Unknown - June 28, 2016
It was a pitcher’s duel between Cole Hamels (9-1, 2.60 ERA) and CC Sabathia (5-5, 3.17 ERA) through seven innings, but Texas broke through with five in the eighth to take Game 2 of this four-game series, 7-1. Carlos Beltran left the game in the first inning with a hamstring injury, but an MRI later revealed nothing severe. Beltran is now day-to-day. 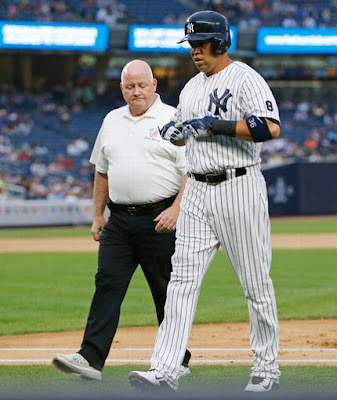 CC Sabathia pitched well in his first seven innings, allowing five hits and just two earned runs. After giving up a two-run homer to Adrian Beltre in the first, Sabathia settled down and returned to form. However, in the eighth, things unraveled for Sabathia. After hitting Shin-Soo Choo, Ian Desmond’s hard grounder bounced off Sabathia’s glove, and then Adrian Beltre’s grounder to third took a tough hop, evaded Chase Headley’s glove, and bounced into left field to give Texas a 3-0 lead. The next batter, Prince Fielder, added a RBI double to extend the lead to 4-0. After Anthony Swarzak came in, the Rangers used three RBI singles to take a 7-0 lead and put this one out of reach. 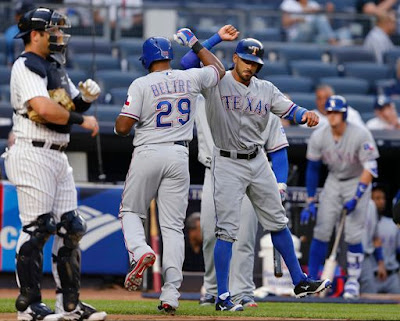 Sabathia was tagged with six earned runs in seven innings, but he did not pitch as badly as his line indicated. However, his ERA did rise to 3.17, which could prevent him from being selected to the All-Star Game.

New York failed to perform once again against a lefty, as Cole Hamels threw seven shutout innings. Hamels dominated the weak lineup, throwing only 86 pitches. The Yankees was able to get a run in during garbage time in the eighth on an Alex Rodriguez sacrifice fly.