By Unknown - June 28, 2016
Here are some quick thoughts on the Yankees 9-6 loss to the Texas Rangers last night/this morning..

1.      Ivan Nova struggled yet again. After looking like a resurgent pitcher in his first few starts, Nova didn't have his best stuff from the first pitch last night. It was far from his worst start ever, but giving up four runs in five innings is not what you want to consistently see. 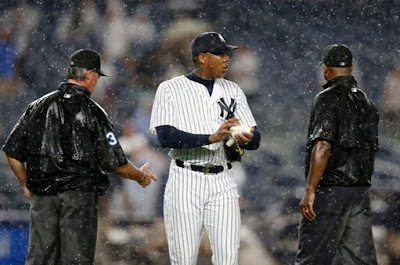 
2.      Outside of “No=Run DMC”, the Yankees have an atrocious bullpen. Yes, Dellin Betances, Andrew Miller, and Aroldis Chapman are filthy. They might be one of the most dominant trios in recent memory. But they don't get as many appearances as they'd like due to the inconsistent relievers in front of them. After the lengthy rain delay, Kirby Yates came in and unraveled right away. In his one inning of work, he was tagged for three runs and hit three (yes, THREE) of the first five batters he faced. He was charged with the blown save as well as the loss, and his ERA is now north of five.

3.      Mark Teixeira looks like he's starting to find his groove offensively. He had three hits, including his second home run in as many nights. It's a small sample size, but he looks more comfortable since his return from the DL.

4.      Carlos Beltran continues to spray the ball around the diamond. The 39 year old is hitting like the perennial All-Star he was 10 years ago. It's quite amazing to watch.

5.      The situation with the rain should have been handled in a much better manner. I believe the game should have been called when the Yankees were batting in the eighth. There were puddles all over the field and, simply put, these were not conditions to be playing in. Girardi was right to say something. There would have been an uproar if Chapman had hit someone with a 100mph fastball because the ball was slippery. With rain in the forecast for the next several hours, it was crazy that the game wasn't ended shortly thereafter. Instead, they resume it at 2:15 EST, three and a half hours after the delay began. That takes Chapman out of the equation, and forces the Yankees to use its shaky middle relievers. Nothing will change just because of this rant, but MLB really should update their policy on suspending games and the like. 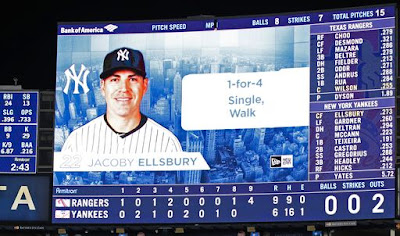 6.      My last observation is a very simple one: Yankees fan are the best in the world. To everyone who stayed at the game, or stayed on Twitter to talk about it, thank you!