By Unknown - June 25, 2016
Despite Mark Teixeira's profound struggles before winding up on the disabled list, it appeared as if the Yankees would be stuck with a black hole at first base in his absence. The up and coming Greg Bird, who excited fans while filling in for Teixeira last year, was already out for the season. The initial replacement, Chris Parmelee, found himself on the disabled list almost immediately after being called up. The Yankees then turned to a player who fans have wanted to see get consistent playing time for quite a while: Rob Refsnyder. While Refsnyder is not considered a great fielder by any stretch of the imagination, he has filled in more than admirably at first base. His offensive production has also been much needed. Simply because Teixeira is returning from the disabled list does not mean the Yankees should sit Refsnyder on the bench. In fact, it would be a travesty. 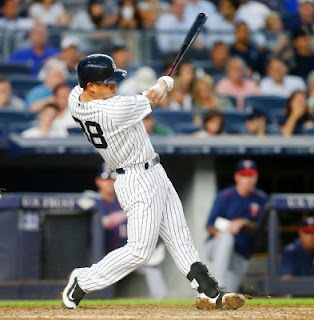 Photo Credit: David Lennon/Newsday
It's no secret that the Yankees are not a very good offensive team, as corroborated by a number of statistics. That being said, they must utilize every offensive asset at their disposal to remain relevant in this regard. Putting aside Carlos Beltran, Didi Gregorius, and even Starlin Castro, the Yankees offense has been horrendous this season. Since being recalled, Refsnyder has been a consistent force in the lineup. In twenty-one games this season, Refnsyder is hitting .286. He also has 8 RBIs, and a .732 OPS. Letting a player who can clearly contribute to this offense sit on the bench, or, God forbid, rot away in the minors, would be a disingenuous move.

I understand the Yankees will essentially be forced to play Teixeira due to contractual obligations. He's also a gold glove defensive first baseman. This is not in dispute, however we cannot ignore his atrocious 2016 season. In forty-eight games before landing on the disabled list, as he often does, Teixeira hit a measly .180 with only 3 home runs and twelve RBIs. For somebody who's being paid $22.5 million, these numbers are unacceptable. As I stated in my latest piece on Alex Rodriguez, a player's stature and salary should not determine the amount of playing time they receive. The players that contribute the most to the team should play the most. Period.

I'm not saying that the Yankees should sit Teixeira on the bench for the rest of the season. This proposal would just be unrealistic. What I am saying, however, is that the Yankees should try to get Refsnyder's bat in the lineup as much as possible. With Teixeira and Rodriguez struggling to put up respectable numbers this season, rotating them out of the lineup would be completely justified if it gives the team a better chance of winning.

Over the last year or so Refsnyder has become quite a valuable piece. He's played games at first base, second base, third base, and even right field. While Castro is a fair bet to play most games at second for the rest of the season, there is certainly room to give Refsnyder playing time at the other positions mentioned above. Chase Headley has been better as of late, but giving him a day off every now and then to get Refnsyder into the lineup seems feasible. Sitting A-Rod, and having Beltran at DH for a few days per week would likely be the most realistic way to get Refsnyder's bat into the lineup.

Believe it or not, the Yankees are only 3 games out of the second wild card spot. The next few weeks will determine whether or not ownership decides to buy or sell at the trade deadline. Even though, regardless of outcome, it may be more prudent to become sellers, ownership likely won't oblige. If the Yankees want to be an exciting team to watch this summer they must continue to give the younger guys a shot. Seeing Stephen Drew at second base for most of last season was an abomination. Refsnyder has finally been given an opportunity to shine, and, for the most part, he's seized it.

Many fans, including myself, are not excited about Teixeira's return. My primary reason for this discontent is that playing time will be taken away from Refsnyder. Considering he will be a free agent at the end of the season, and in all likelihood won't be in a Yankee uniform come 2017, the Yankees should hope Teixeira steps up his play as a means of earning his next contract. Even if the Yankees can't find a long-term position for Refsnyder, giving him an adequate amount of playing time can still be conducive to the team's interests. If he continues to produce, his trade value will also subsequently increase. As the year continues to drag on, the Yankees can't lose sight of the big picture. Should they choose to continue on the course of "fake contending," the least they could do is provide the fans with a team worth watching. Such a team should give a young player with potential, such as Rob Refsnyder, playing time over boring veterans who have struggled to produce.