By Unknown - June 04, 2016
Looking for revenge from last night’s loss, the Yankees offense erupted for four runs in the fourth inning and totaled 16 hits in a 8-6 win against the Orioles on Saturday night. After Carlos Beltran and Alex Rodriguez started the inning with consecutive singles, Starlin Castro’s RBI double put the Yankees up 2-0. Didi Gregorius contributed with a RBI groundout, and then Rob Refsnyder’s RBI double and Austin Romine’s RBI single extended the Yankees lead to 5-0 after four innings. 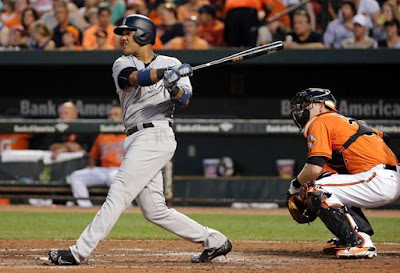 
In the sixth, Jacoby Ellsbury put the Yankees up 7-0 when he stole home for the second time this season. Brett Gardner stole second, and on the throw down, Ellsbury took advantage and stole home.

With the Orioles down 7-0 going into the bottom of the seventh, and Ivan Nova still cruising, Baltimore looked to get back into the game and did so quickly. Mark Trumbo led the seventh off with a solo home run. Wieters followed with an infield single and scored when Pedro Alvarez homered to bring the O’s within four runs. 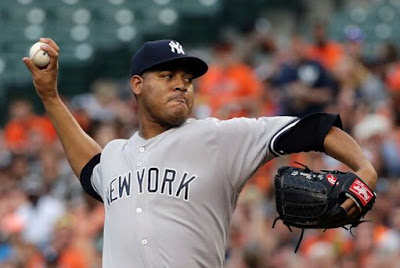 The Yankees picked up an important insurance run in the top of the ninth. After Aaron Hicks doubled with one out, Alex Rodriguez’s RBI single drove in Hicks and the Yankees took an 8-6 lead to the bottom of the inning for Aroldis Chapman.

Andrew Miller, the savior in this game, retired all six batters he faced in the 7th and 8th to preserve a one-run Yankees lead.

Aroldis Chapman picked up his ninth save of the season with a scoreless ninth.

Ivan Nova (4-3, 4.41 ERA) picked up his fourth win of the season, and pitched better than his line indicated. In his first six innings, he allowed only three hits and did not allow an earned run. However, he gave up three runs in the 7th, and was tagged with two more after Jones’s home run.