Yankees should trade Aroldis Chapman no matter what

By Unknown - June 14, 2016
The Yankees lately have gotten their act together for the most part and were able to win some ball games, including a five-game winning streak that included a four-game sweep of the Los Angeles Angels. During that time, Carlos Beltran was the best hitter and CC Sabathia pitched like it was 2009. 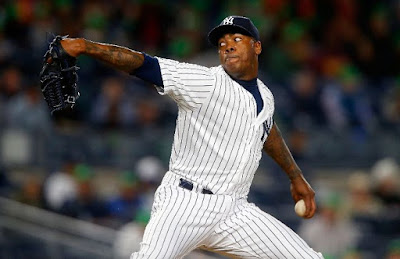 Although it looks like the Yankees may have figured some things out, they are still low in the standings and are one bad series away from being back in last place. The Yankees have also had underperforming players on their roster and with the Yankees on their fifth-string first baseman, it’s hard to see the Yankees being able to be serious contenders for the whole season.


Even if the Yankees are able to contend, they could still afford to trade away one of their big three relievers and still be able to win ball games and improve for 2017 and beyond. Out of the big three relievers, the Yankees should trade flamethrower Aroldis Chapman. Chapman has been solid since returning from his suspension, converting eleven saves and pitching to a 1.93 ERA in fifteen games. Chapman has also struck out twenty one batters in fourteen innings. Because of the off-the-field issues, the Yankees were able to acquire Chapman without giving up too much and with his suspension over, the Yankees should get a better return if they flip him to another team.