By Unknown - June 15, 2016
This Yankees team occasionally has the tendency to make mediocre pitchers look like Cy Young winners, and tonight’s loss was a prime example. Colorado Rockies starter Jorge De La Rosa (3-4, 7.61 ERA) came into tonight with an ERA of 8.81, and no, that’s not a typo. The left hander threw five innings of shutout ball, allowing only three hits. 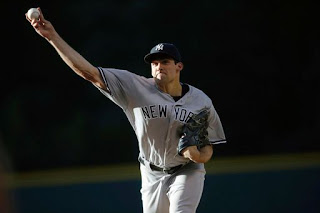 De La Rosa was aided by his team’s top five offense, as the Rockies pounded Yankee’s starter Nathan Eovaldi (6-3, 4.90 ERA), shelling him for six runs off eight hits in only four innings. Eovaldi was looking to get back on track after giving up nine earned runs in his previous two outings, but the right hander couldn’t finish off hitters, and was a victim of the long ball. In the 4th inning, Eovaldi served up back-to-back homers to Trevor Story and Ryan Raburn, making the score 4-0. Kirby Yates came in to relieve Nick Goody and let up a single and allowed a run to score on a botched pickoff attempt.

Despite having zero offense for the first five innings, the team woke up, as Didi Gregorius slammed a three run homer in the 6th. In the 8th, however, is where things got crazy. The Yanks had the bases loaded and cashed in, as both Ike Davis and Jacoby Ellsbury had RBI singles. Starlin Castro got an infield single that scored two from a throwing error. Brian McCann got in on the fun, collecting an RBI groundout. Even Chase Headley joined in, slapping an RBI single up the middle. Rob Refsnyder followed up with another single. 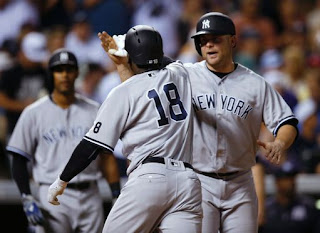 
Didi Gregorius had a solid night, going 2 for 4 with 3 RBI’s. The shortstop also made a highlight reel play to rob Gerardo Parra of a base hit, saving a run in the process. Rob Refsnyder also had a great night, going 3 for 5. The 25-year-old had some defensive miscues at first base, which is to be expected as he learns the position.

Rockies slugger Carlos Gonzalez went off tonight, going 4 for 5 with 2 RBI’s and a homerun off of Andrew Miller.