Breaking down the trade market for Ivan Nova

By Unknown - July 27, 2016
A free agent at the end of the season, Ivan Nova’s name has been floated around in trade rumors for a while now, dating back to last season. Sure, he’s really just a back-end of the rotation type arm, but the pitching market is heavily inflated this summer. His 4.65 ERA isn’t attractive, but his 2.66 ERA in his last four starts has increased his trade value. With a severe lack of high-end talent for starting pitching, Nova would bring back a return higher than most would expect, despite his fairly mediocre career numbers. With this being said, here are a few teams that could be interested in acquiring Nova. 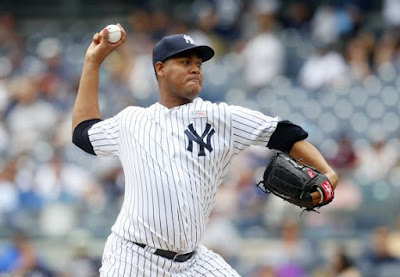 Miami Marlins
Mark Feinsand of the Daily News reported that the Marlins, who have been in dire need of pitching depth, are interested in Nova. The Marlins are battling for a Wild Card spot and need the rotation to help get them there. Aside from ace Jose Fernandez, Miami’s starting rotation is incredibly inconsistent. Not that Nova is Mr.Consistent himself, but he’d be a valuable piece to a team that also needs bullpen help, where they could utilize his role as a swingman. After losing offseason acquisition Wei-Yin Chen to the DL, Nova would represent a significant upgrade over the incumbents occupying rotation spots.

The Rangers haven’t been linked to Nova specifically, but they have been linked to starting pitching in general. While there have been reports of them trying to acquire Tampa’s Chris Archer or Matt Moore, they might feel more comfortable making a low risk move for Nova. They wouldn’t have to give up their top guys like Joey Gallo or Jurickson Profar, and they’d be getting someone who could solidify the backend of a rotation that currently sports a 4.23 ERA.

Like the Rangers, the Giants haven’t been linked to Nova, but they are also in search of rotation help. San Francisco has a solid trio of Madison Bumgarner, Johnny Cueto and Jeff Samardzija, but Matt Cain's age and Jake Peavy’s 5.42 ERA don’t offer much to be excited about. Nova would remove one of Cain or Peavy from the rotation, which would be best for him, as he is nothing more than number four or five starter. For a team that that needs to maintain their slim lead over the Dodgers, solidifying the back end of the rotation is a must.