By Unknown - July 24, 2016
Taking two out of three from a premier team like the San Francisco Giants was not something the Yankees were supposed to do, if you want them to sell. But, for now, that sell mentality will once again be put to rest after a 5-2 victory over the Giants on Sunday afternoon.

Finding himself in the middle of trade rumors, Nathan Eovaldi (9-6, 4.80 ERA) tossed 7.2 innings of two-run ball, allowing seven hits, striking out six and walking two. Today’s start coupled with his strong start against Baltimore last week have increased his trade value, and it should be interesting to see if a team makes a deal for him in the days leading up to the deadline. On the other side, Giants’ starter Jeff Samardzija (9-6, 4.22 ERA) didn’t have much success. He allowed two homers, one to Mark Teixeira and one to Carlos Beltran, potentially in his final days in pinstripes, who now has 21 on the year. 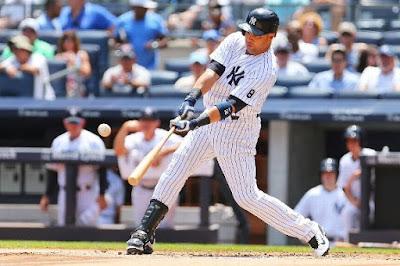 
Besides the two homers, Samardzija was cruising until the sixth, when Jacoby Ellsbury grounded into an RBI double play that plated Aaron Hicks. After hitting back-to-back singles, Carlos Beltran and Brian McCann came around to score on a Starlin Castro single. Didi Gregorius kept it coming as he smacked a double to score Castro.

Since No Runs-DMC was unavailable today, Chasen Shreve and Chad Green came in relief, combining for one strikeout, one walk and zero earned runs.