Five keys to second half success- and they include a lineup change!

By Unknown - July 14, 2016
When the official second half of the baseball season commences, the Yankees will hope to build on their impressive series victory against the AL Central-leading Indians in Cleveland. I have unequivocally argued that the Yankees show be sellers this year on numerous occasions, however the purpose of this piece is to present an alternative scenario. We all know that the Yankees organization, as Randy Levine indicated a couple weeks ago, will continue to hold out hope that this team will turn it around. As unlikely as it seems, it's still a remote possibility. Below I've identified, and elaborated on, five things the Yankees must do out of the gate in the second half if they are to have any hopes of becoming a serious contender. Some of these solutions may appear to be rudimentary in nature, but others could have a surprisingly beneficial impact on the inconsistent bunch known as the 2016 New York Yankees. 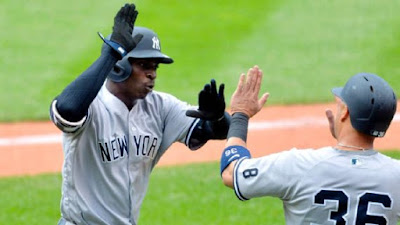 Joe Girardi began experimenting with this in the week or so leading up to the all star break. He flip flopped Jacoby Ellsbury and Brett Gardner in the order, and subsequently moved the red hot Didi Gregorius up to to as high as the fifth slot. These were not only interesting moves, they were also a step in the right direction. With the state of the Yankees offense, they MUST get as many at bats for the players who have shown they're capable of consistently hitting well. Reputation should be irrelevant at a point in the season when the Yankees are struggling to remain afloat. Below please find my suggested lineup change.

NOTE: I'm excluding A-Rod because he's been relegated to a platoon role at this point. This lineup is subject to change based on which players are struggling or succeeding at the moment. That being said, when the Yankees begin their series against the Red Sox on Friday, this is the lineup they should be running out.

This is one of the more obvious solutions that I'm proposing. Throughout the course of the first half, the Yankees were horrendous with RISP. I think the lineup I proposed above would actually help somewhat remedy this continuous problem. At the end of the day, it comes down to situational hitting. We saw signs of this in Cleveland, which was quite encouraging. Instead of swinging for the fences every time up, the Yankees should simply prioritize getting the runner home. Having players who have shown they can do this, such as, Gregorius, Beltran, and Castro, at the heart of the order may be a step in the right direction.

The first issue with this Yankees team is its veterans have not replicated their 2015 success, with the notable exception of Beltran, of course. Last season, Alex Rodriguez and Mark Teixeira came out of the gate with guns blazing. This season, both have struggled profoundly. With Teixeira entering a contract season, we can only hope his motivation to get paid will power him to a monster second half. A-Rod, on the other hand, has seen his playing time cut drastically. If Beltran is traded, he should see himself back in the everyday DH role. Even if Beltran is not traded, I expect the former slugger to be given another chance to prove he still has something left in the tank.

The second of the three problems pertains to the middle relief situation. We all know that Dellin Betances, Andrew Miller, and Aroldis Chapman are as good as it gets for a backend of a bullpen, however bridging the gap between the inconsistent starters, who I will discuss next, and these three has been an unmitigated disaster. No matter who the Yankees call up- Nick Goody, Luis Cessa, Kirby Yates, etc, they can't get the job done. In our recently released mid-season report card grades article (CLICK HERE), I named this crew, "the revolving door of clowns." The Yankees need to hope one of thes guys they call up can fill this important void. I'm holding out hope that Chasen Shreve can rediscover what made him great for much of 2015 before his implosion in the second half. That being said, without an effective bridge of at least two pitchers to (no run) DMC, the Yankees will continue to lose many close games.

5. Distance from the starters

Heading into the season, the Yankees' rotation was expected to be the team's most obvious weak spot. Of course, this speculation has materialized into fact. While Masahiro Tanaka and CC Sabathia (surprisingly) have both been solid, the rest of the rotation is in shambles. Michael Pineda started off horrendously, but has been better of late. Nathan Eovaldi, prior to his demotion to the bullpen, witnessed the opposite phenomenon occur. Ivan Nova, who filled in for Luis Severino following his early struggles, has had a season full of ups and downs. I suggest that the Yankees immediately recall Severino, and give him another shot. This guy is a huge part of our future. Considering he is only 22-years old, I'd much rather watch him develop than see Nova get bombarded every fifth day. Besides calling up Severino, Im not sure the Yankees can do much else with the rotation. They can give Eovaldi his rotation spot back, and hope he can build on his two successful relief outings, but I wouldn't hold my breath.

Conclusion: The New York Yankees are at a crossroads. Many Yankees fans who have never witnessed a losing season, like myself, are disappointed. Although I believe this team should sell regardless of how they perform over the course of the next ten games, this stretch will ultimately determine the approach Brian Cashman takes. Changing the lineup, taking a situational approach to hitting with RISP, getting production from players who had subpar first halves, finding a solution to the middle relief situation, and getting more distance from the starters will help this team stay afloat. For once, I've decided to take an optimistic approach towards evaluating this team. While, in this case, such an approach may be dishonest, we should still consider how the Yankees can turn their season around. Believe it or not, this team is only 5.5 games out of the second wild card. If the pieces do finally start to click, and for the record I think they won't, we may see a somewhat exciting second half.