By Unknown - July 02, 2016
About a month ago, most Yankees fans, including myself, were ready to run Michael Pineda out of town. Despite his profound struggles early on, Pineda seems to have finally figured it out. Granted, he's exhibited flashes of brilliance in the past so we should maintain a certain level of skepticism. On the other hand, however, Pineda has responded to a tremendous amount of adversity this season. After a horrendous April and May, Pineda has quietly gotten his season back on track. If we are finally seeing the real Michael Pineda, his best performances may be in the future. With the recent struggles of Nathan Eovaldi and Ivan Nova, it is of the utmost importance that the Yankees have another solid starting pitcher. It just so happens that Pineda may have become that guy.

DISCLAIMER: This article is in no way an endorsement of Michael Pineda, nor is it a prediction that he has indeed turned it around. It's a simply an opinion-based observation. 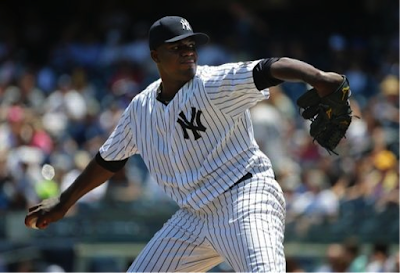 AP Photo/Frank Franklin II
I'll be the first to admit that I've been hard on Michael Pineda over the last couple of years. Knowing that he possesses such incredible abilities, but has been unable to put it together since arriving in the Bronx is extremely frustrating. We need look no further than his performance last May to capture such sentiment. In an unforgettable Mother's Day start against the Baltimore Orioles, Pineda struck out 16 batters in seven innings of work. At this moment, I truly thought we had an ace in the making. Unfortunately, he's gone through quite a regression since then.

In ten combined starts in April and May, Pineda went 2-6, while putting up a 6.93 ERA. For a pitcher with expectations as high as Pineda, and for that matter any starting pitcher, these numbers are an abomination. It seemed as if every game he pitched was an expected loss. Many fans began to call for his removal from the rotation, and justifiably so. Due to the Yankees lack of starting pitching depth, they were unable to make any such move. Although, as we know, manager Joe Girardi is no fan of shaking things up, even when a shake up is desperately needed.

Now, I'd like to move on to the positives. In his 6 starts in the month of June, Pineda has gone 1-1, with a 2.75 ERA. Furthermore, he's struck out 49 in 36 innings of work. In June, opponents hit a measly .201 against Pineda. This month may be a small sample size, however his performance this past Monday against the Texas Rangers prompted me to research Pineda's progress, and subsequently write this article. His 12 strikeout performance against the Rangers was reminiscent of what we saw early on in 2015. Bear in mind that the Rangers have one of the best offenses in the league so this is quite an impressive feat.

Although the month of June has come to a conclusion, we should hope Pineda's resurgence continues as the weather gets hotter, and the games become more meaningful. I've spent a lot of time writing about the Yankees 2016 hopes, and for the sakes of this piece, I won't delve into the topic. I will, however, make one comment. Regardless of whether the Yankees are indeed contenders, or pretenders, having Michael Pineda on track is a huge development.

After the 2012 trade that sent prized prospect, and subsequent bust, Jesus Montero to the Mariners, the Yankees assumed they were getting back a pitcher with ace-like capabilities. While Pineda has shown flashes of brilliance, his time in the Bronx has been consumed by injuries and inconsistencies. The injuries appear to be behind him, but his inconsistencies have derailed him from harnessing his incredible amount of talent.

With Pineda, I truly believe the source of his struggles is mental in nature. To me, this is more troubling than any possible mechanical issue. If the latter were the source of the problem, the coaching staff likely would have found a solution by now. Until recently, Pineda struggled with mitigating his damages. As soon as the opposing team got a rally going against him, Pineda would instantly become rattled, and consequently implode. If he has overcome this obstacle, then we should be excited to see what else he has to offer.

I've been one of Michael Pineda's biggest critics, however that hasn't stopped me from rooting for the guy. There has never been any doubt as to whether Pineda had the necessary talent to become an elite pitcher in this league. Unfortunately, these aspirations have not come to fruition. By no means am I saying that Pineda's dominant June performance should be taken as a sign of him emerging as an elite pitcher in this league, but I do think he can be a solid number 2 or 3 in this rotation. With Masahiro Tanaka and CC Sabathia on top of their games this year, for the most part, a consistent Pineda instantly makes this rotation much more formidable. It's very likely that Pineda will regress yet again, however he's certainly laid the requisite foundation for a great rest of the season.