By Unknown - July 29, 2016
Following impressive series victories against the Baltimore Orioles, San Francisco Giants, and Houston Astros, the Yankees once again took two steps backwards against the last place Tampa Bay Rays. The Yankees dropped to 52-50, still only four games out of the second wild card spot. Unfortunately, Ivan Nova struggled from the very beginning. In perhaps, and for that matter hopefully, his last game in a Yankee uniform, Nova could not mitigate his damages, giving up five earned runs in 4.1 innings pitched. Tonight, he was not bailed out by the inconsistent offense, which was shut down against Rays starter Jake Odorizzi. 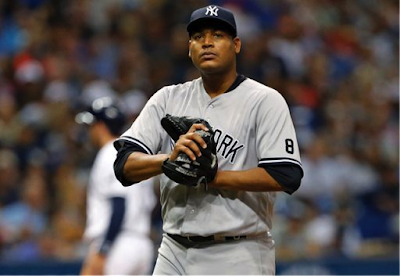 Photo Credit: AP Photo/Mike Carlson
From the very first batter he faced, one could tell this was going to be a long night for the ever inconsistent Nova, who gave up a solo home run to Logan Forsythe in the bottom of the first inning. Two outs later, Chris Dickerson also took Nova deep, giving the Rays a 2-0 lead.

Though he gave up another run in the third inning, things really fell apart for Nova in the bottom of the fifth. With no outs and Brad Miller, who had just doubled, on second, Evan Longoria ripped a RBI double to left field, making it 4-0 Rays. With runners on first and third with one out, Joe Girardi determined that he had seen enough, prompting the manager to bring in Chad Green. Though Green gave up a sacrifice fly to Steven Souza Jr, he worked his way out the inning without further damage.

Chad Green may have been the only positive of this game. After relieving Nova, Green proceeded to pitch 3.2 scoreless innings. If the Yankees do move one of their starters at the deadline, Green is a likely candidate to get a rotation spot. Whether or not it should be him or Luis Severino is a discussion for another day.

The Yankees attempted to make some noise in the top of the eighth. With runners on first and second with two outs, Mark Teixeira went the opposite way with RBI single, making it 5-1 Rays. With the same scenario now in place, Didi Gregorius flied out to center, thus ending any hopes of a Yankee rally.

Also of note, Alex Rodriguez had a pinch hit single in the ninth, which may possibly lead to an increase in his playing time, at least in the immediate future.

The Yankees hope to even up the series tomorrow when they send the suddenly resurgent Nathan Eovaldi (9-6, 4.80 ERA) to the mound to face off against Drew Smyly (2-11, 5.42 ERA). On paper, this game certainly favors the Yankees, however nothing surprises me with this team anymore.