By Unknown - July 31, 2016
When I woke up this morning, and saw multiple notifications on my phone indicating that the Yankees had traded Andrew Miller, I entered into a state of shock. As we know, the writing has been on the wall for a couple of months, but knowing that the Yankees are officially in all-out sell mode is a bit of culture shock. In exchange for the All-Star reliever, Cleveland sent minor-league infielder Clint Frazier, and pitchers Justus Sheffield, Ben Heller, and J.P. Feyereisen to the Bronx. This is a move that may sadden some of us Yankees fans, but we must realize it is a necessary step in the path towards stockpiling minor league talent in a lost season. 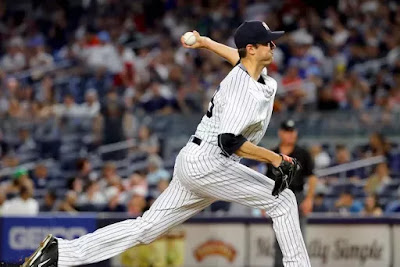 
First and foremost, I'd like to thank Andrew Miller for his year and a half in New York. Miller has been a consummate professional both on and off the field. The organization will miss him profoundly. Regardless of what the Yankees needed him to do, Miller always obliged. Initially signed as a set up man in the 2014 offseason, Miller seized the closer's role and ran with it, becoming one of the best in the league. After the Yankees acquired Aroldis Chapman, who was dealt to the Cubs earlier in the week, this offseason, Miller graciously moved back to the eighth inning. Miller is a winner who always prioritized the needs of the team over his own personal glory. Once again, thank you Andrew Miller.

This trade is significant because it indicates that the Yankees will officially be sellers as we move ahead to Monday's trade deadline. While last week's trade of Aroldis Chapman may have been the first indication, this team still could have realistically been in contention. Moving Miller, however, is essentially waving the white flag. I'm happy that ownership has finally recognized the reality of the situation, and granted GM Brian Cashman permission to act accordingly. We should expect to see some other dominoes to fall in the coming days. Carlos Beltran, who will be a free agent at season's end, is almost certain to be amongst them.

All things considered, this is a great trade for both teams, especially the Yankees, as they move forward with the goal of building a better team in the long run. The Indians acquired one of, if not the, best relievers in the game of baseball. The first place Indians hope to make a deep playoff run this October, and Miller will give them a significant advantage in the late innings. He's battle tested and ready to win.

The Yankees, on the other hand, continued their goal of stockpiling young talent. Twenty-one year old outfielder Clint Fraizer is the centerpiece of this trade for the Yankees. In 94 total games this season, 89 in AA and five in AAA, Frazier is hitting .276 with 13 HR, 48 RBIs, and 13 SB. Frazier, the top prospect in the Indians organization, was ranked as the 21st prospect in the game by Baseball America in their midseason rankings. The addition of Frazier alone drastically improves the Yankees farm system. With Aaron Judge also in the wings and Jacoby Ellsbury under contract for four more years, this could mean Brett Gardner may be headed out of town soon. Gardner's position would be the only logical one for Frazier to fill. This is definitely something to watch in the coming days.

Justus Sheffield was listed as the Indians's fifth best prospect, and 69th overall, in the same Baseball America ranking. Although this trade is clearly about Frazier, the addition of Sheffield is also a significant one. The Yankees have an abundance of infield prospects, especially with the addition of Gleyber Torres in the Chapman trade, and two great outfield prospects (Judge and Frazier), but do not have much depth as far as pitching is concerned. Sheffield is a step in the right direction. In 19 Class-A starts this year, the twenty-year old Sheffield is 7-5 with a 3.59 ERA, striking out 93 in 95.1 innings.

The Indians also threw in two minor league relievers, Ben Heller, and J.P. Feyereisen. This year has shown us that the Yankees have a desperate need for consistent middle relief. Getting Adam Warren back in the Chapman trade is a move that should not be minimized, however much work has to be done in this area. With the exception of Dellin Betances, Miller, and Chapman, our bullpen has been a train wreck this season. With the recent trades of Miller and Chapman, we now have only one elite reliever. In 41.2 innings in the minors this season, Heller is 3-2 with a 1.73 ERA. He also has 48 strikeouts. Joel Sherman has reported on Twitter that the Yankees see Heller in a possible seventh inning role next season. Feyereisen is a strikeout pitcher who could also make this trade a great one for the Yankees. In 40.1 AA innings, Feyereisen has struck out 56, and pitched to a 2.23 ERA.

The trade of Miller also makes it more likely that the Yankees are reunited with Chapman this offseason. As much as I personally loved Miller, it's a move that the Yankees had to make. The more I look at this trade, the more I like it. The addition of Frazier instantly bolsters the Yankees farm system, and gives us fans another player to look forward to seeing in the majors. Judge, Ellsbury, and Frazier would theoretically comprise an exciting outfield. Sheffield provides the Yankees with much needed starting pitching depth. Next year, our bullpen should be drastically improved. If Chapman is resigned to pair with Betances, the bridge of Warren, Heller, and possibly Feyereisen could once again make this a strong point for the team.

As we prepare ourselves for Monday's deadline, we now officially know that the Yankees are sellers! Carlos Beltran, Brett Gardner, Brian McCann, Nathan Eovaldi, Ivan Nova, and Michael Pineda are amongst the players who the Yankees could move at any moment. This is not a position that we're used to being in, but since the organization has conceded the season, they should add as much young talent as possible. Once more, thank you Andrew Miller for being a tremendous Yankee! Losing Miller may bring us pain at the moment, but in the long haul this trade should be a victory for the Yankees.

All statistics compiled from Baseball Reference.