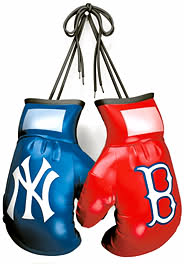 The Yankees will open up the second half of the season with a weekend series against their historic rivals, the Boston Red Sox. The Bronx Bombers come into play sitting at .500 with a 44-44 record. The Yanks are 2-4 against their long time foes this season with Boston sweeping the first series of the season in late April and the Yankees taking two of three from Boston in early May. This series is important for New York for not only bragging rights against Boston, but this series could make or break what the Yankees do at the deadline. GM Brian Cashman is reportedly at odds with team President Randy Levine and owner Hal Steinbrenner on whether to buy or sell at this year’s trade deadline. Buckle up for a series of four hour games; its Yankees and Red Sox live from the Bronx.

GAME ONE: (Friday July 15, 2016| 7:05 PM ET
Michael Pineda (3-8, 5.38 ERA) vs. Steven Wright (10-5, 2.68 ERA)
This one doesn’t look to promising on paper for the Yankees. Steven Wright has been the ace of the Red Sox staff and was named to this year’s All-Star team. Wright has stifled the Yankees in the past including a win in Yankee Stadium this past May. Big Mike has looked better as of late but still comes into this game with a hefty 5.38 ERA. Pineda can look downright dominant at times but against a very well balanced, talented and patient Boston lineup this matchup poses a plethora problems for Pineda.

Game Two: (Saturday July 16, 2016)| 4:05 PM ET
CC Sabathia (5-6, 3.77 ERA) vs. Eduardo Rodriguez (1-3, 8.59 ERA)
The Yankees have to be beyond pleased with what they have gotten out of Sabathia this year. He can’t throw as hard as he once did, but Sabathia lives on his offspeed pitches while painting the corners like he is related to Rembrandt. On the other side the Yankees will face young southpaw Eduardo Rodriguez who has struggled immensely this year in a limited number of innings. He’s spent the bulk of the season on the DL but when he has pitched he has been ineffective. Saturday will make his first start since being recalled from AAA Pawtucket. Although he pitched well against New York last year it seems like this game is a grand opportunity for the Yankees to flex their muscle and knock the young lefty out of the game early.
Game Three: (Sunday July 17, 2016) |8:05 PM ET
Masahiro Tanaka (6-2, 3.23 ERA) vs. David Price (9-6, 4.34 ERA)
Sunday night ESPN baseball will have a great pitching matchup as the Yankees will throw out their Ace Masahiro Tanaka against Boston’s 217-million-dollar man David Price. Tanaka has had a really solid season for the Yankees and has been the stopper that they have needed all season long. David Price has not been the stud the Red Sox thought they were signing although he is coming off an eight inning shutout performance against Tampa Bay. In his two starts against the Yankees this year the Bronx Bombers have gotten to Price early and often. Looking at both pitchers’ performances as of late, this could be an old fashion pitchers duel where one or two runs wins the game.

Three Yankee Players to Watch
Three Red Sox Players to Watch
Keys to Victory
Prediction:
I think the Red Sox win two out of three in this series. Game one should be an easy victory for Boston while the Yankees should pick up the W in game two. Game three to me could honestly go either way. Tanaka is a great pitcher and is more than capable of going out there and silencing Boston’s big bats. David Price looked like the David Price of old in his last start. It’s hard to imagine him losing a game of this magnitude when he’s already failed against New York twice this year. In another classic New York and Boston matchup it should be the Red Sox who come out on top this series.