By Unknown - July 06, 2016
Heading into this season, neither one of these teams had high expectations nor they were expected to win their respective divisions. Through 84 games, the Yankees have been as advertised, continuing their mediocrity, as they have gone 41-43. They have been one of the more streaky teams in baseball in every facet of the game with their bullpen, offense, defense, and rotation. On the other hand, the Indians have taken a 6.5 game lead over the Tigers, thanks in large part to their recent 14 game winning streak. Incredibly, before Wednesday’s loss against division-rival Detroit, they had not lost a home game since May 31. Their 51-33 record is good for fourth best in the majors. They will look to continue their fantastic first half when they take on the New York Yankees for the first time this season, at Progressive Field.

Ivan Nova was surprisingly good early on. He allowed one run or less in four consecutive starts back in May. Nova then reverted back to his normal self, giving up three or more runs in his next seven starts, before last week’s one-run performance against San Diego’s weak lineup. Although he has good movement on his curveball, it's hard to be a successful MLB pitcher with just two pitches.

A major prospect a few years back, Bauer has really turned things around this year. Although he has always had filthy stuff, it hasn't necessarily translated into good results, as he was moved to the bullpen last season and hovered around a 5.00 plus ERA. Thus far, Bauer has pitched to a 7-2 record and an ERA of 3.02. Only 25 years old, he has a very bright future ahead of him and his stuff will likely give the Yankees problems.

Game 2 (Friday, July 8 at 7:10 PM ET): Chad Green (1-1, 4.09 ERA) vs. Corey Kluber (8-8, 3.79 ERA)
Essentially replacing Nathan Eovaldi’s spot in the rotation for the time being, Chad Green did an excellent job in his second career start against the Padres, holding them to one run in six innings, to go along with eight K’s. Due to Eovaldi's profound struggles, Green could keep a rotation spot with another good start.

Although the he has struggled to regain the Cy-Young form he had two years ago, Kluber still shows flashes of dominance. His inconsistency has been disappointing, but he still goes late into games and strikes out many hitters. Heading into the series, he ranks fifth among AL pitchers in strikeouts with 114 in 114 IP, which is second in the AL. The Yankees offense has struggled with strikeout pitchers, so this will be a difficult matchup in game 2.

Game 3 (Saturday, July 9 at 4:10 PM ET): C.C. Sabathia (5-6, 3.48 ERA) vs. Danny Salazar (10-3, 2.36 ERA)
In the midst of a bounce back season, Sabathia has been a solid number two pitcher for the Yankees. After taking a break from baseball at the end of last season due to alcohol problems, he has found success. Despite a strong showing for most of the season, he has struggled lately allowing 16 earned runs in 17.1 innings of work over his past three starts. This start will be crucial for Sabathia, especially against All-Star Danny Salazar.

Danny Salazar has broken out this season, being the Indians’ best starter and arguably the best in the AL. In the first half of this season, he is first in ERA, sixth in strikeouts, and tied for fourth in wins. Opponents are batting just .195 against him, good for 2nd in the AL. The Yankees offense will have trouble getting anything going against this ace.

Game 4 (Sunday, July 10 at 1:10 PM ET): Masahiro Tanaka (6-2, 3.12 ERA) vs. Carlos Carrasco (5-2, 2.47 ERA)
The Yankees’ ace has had his ups and downs again in this 2016 season. He has stayed surprisingly healthy and has produced quality results. Although still not as good as his rookie season, Tanaka has produced a quality start in seven of his last nine starts and a team-leading 11 overall on the season.

Plagued by a hamstring injury early in the season, Carrasco has been dominant when on the mound. He has an incredible 0.68 ERA over his past 26.2 IP (three and a half starts), while facing Detroit’s elite offense twice and Toronto’s high-octane lineup once. A key part of Cleveland’s incredible all-around rotation, he has often been overlooked by fans and teams around the league. 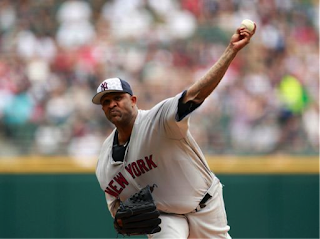 3 players to watch for the Yankees:
1. Brian McCann - Unlike many other Yankee veterans, McCann has stayed relatively healthy the past few seasons. He has provided the Yankees with his reliable catching behind the plate and superb power. This season hasn't gone as planned thus far. Just a few weeks ago, he was fighting to stay above the Mendoza line.

2. Didi Gregorius - Acquired from Arizona in the 2014 offseason, Didi has turned into one of the better shortstops in the AL. He was always considered to be good with the glove, but this season he has shown a good average and surprise bursts of power, as he has a .293 average and nine home runs thus far. He, like McCann, has been on a tear lately so it'll be interesting to see if it continues against one of the best pitching staffs in the MLB.

3. Nathan Eovaldi - If you haven't heard, Eovaldi has been sent to the bullpen. Like Nova, he has fallen off incredibly since a good start to the season. He has continued to struggle to put guys away with two strikes and has an incredibly high WHIP of 1.41. Along with his high WHIP, his ERA is also well above 5.00. It'll be interesting to see if he gets any action coming out of the pen in this series. If he finds a rhythm there, it could be a spot he stays in for the rest of the season. It also depends greatly on how youngster Chad Green pitches in his start. 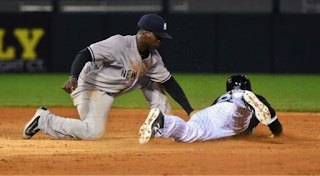 3 players to watch for the Indians:
1. Francisco Lindor - Lindor has built off of his strong rookie season, making him one of the top shortstops in the game. Selected as a 2016 All-Star in this year’s Midsummer Classic, he has been a steady presence in the three hole for Cleveland, with his stellar defense, above-average power, and threat on the base paths with 13 stolen bases. A former top-prospect, Lindor has started living up to those expectations and has rose to stardom.

2. Mike Napoli - In the offseason, Napoli’s acquisition was considered an afterthought. A guy who showed diminishing power, below-average defense, and a consistently bad batting average, Cleveland fans weren't thrilled at the thought of Napoli batting in the everyday lineup for the Tribe. Instead, he has experienced a bounce back season, showing the power he's always been known for and being a veteran presence in the clubhouse. Despite being on pace to finish with the third-most strikeouts in MLB history, he has been a huge contribution to Cleveland currently being first in the AL Central.

3. Tyler Naquin - Once a first-round pick by the Indians, Naquin has struggled to get going in the pros since being drafted. His first few seasons were disappointing compared to the expectations raised by many fans. After finally getting it going in the minors in 2014 and 2015, both seasons were cut short due to injuries. Then, this year, he has gotten a chance in the majors and has produced very good numbers in center field. In 147 ABs, he has produced an average of .320, along with seven HRs and 19 RBIs. Not only has he had a huge impact on the team, but he has helped Cleveland fans forget about the severe right shoulder injury to Michael Brantley and Marlon Byrd’s 162-game suspension for PED use. With both players sidelined, many counted this team out and figured their average offense had just gotten even worse. Naquin has been an essential piece to the Indians offense.

Two keys to victory for the Yankees
1. Success from the middle inning relievers or length from starters: For the past few seasons, the Yankees have used an unusually inconsistent bullpen. The rotation hasn't been much better. Other than no run DMC at the backend of the bullpen, no reliever can be counted on consistently. Constantly calling guys up and sending them down, the Yankees have stuck to the principle of using the freshest arms. Due to this strategy, many of these relievers can't to find a rhythm in the big leagues. The success of these relievers is crucial to the outcome of each and every Yankee game.

Prediction
With the Indians coming off a recent 14 game winning streak and having the second best record in the AL, I think all Yankee fans would be fine with splitting the series. The Indians possess one of the better starting pitching staffs in the majors, which will likely be a problem for the Yankees' inconsistent offense. They also have a solid mix of savvy veterans and shining young players on offense. The first two games give major advantages to the Indians, with the last two featuring good pitching match ups. In the first series between the two teams this season, the Yankees will drop three out of four in Cleveland, avoiding a sweep in the series finale.