By Unknown - July 07, 2016
The Yankees began a four game series against the red-hot Cleveland Indians with a narrow 5-4 victory following disappointing visits to San Diego and Chicago, where they dropped two out of three in each respective series. Ivan Nova pitched well enough to keep the Yankees in the game, while the offense did just enough to put the game in the hands of the team's biggest strength: (no run) DMC, which did not disappoint. 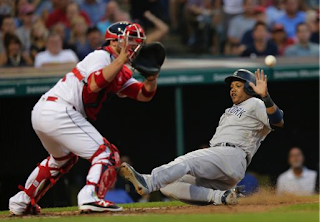 The Indians got off to a quick 2-0 lead against Nova in the bottom of the third inning due to solo home runs from Tyler Naquin and Jason Kipnis. From this point, until the sixth inning, Nova settled down for the most part.

In the top of the fifth inning, the scorching hot Didi Gregorius, who many would argue qualifies as an All-Star snub, hit his 10th home run of the season to bring the Yankees to within one run. Brett Gardner then hit an RBI single to drive in Chase Headley, tying the game at two.

The Yankees put together somewhat of an offensive eruption in the top of the sixth inning. With runners on first and second with one out, Headley singled to right field. Starlin Castro attempted to score from second base, and was initially called out. After a Yankee challenge, the call was overturned, giving the Bombers a 3-2 lead. Rob Refsnyder continued to get the job done with a sacrifice fly, making it 4-2 Yankees. Jacoby Ellsbury's two-out RBI single brought home Headley, handing the Yankees a 5-2 lead. 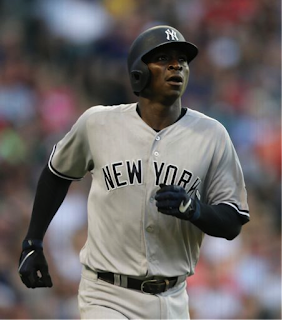 Things unraveled quickly for Nova in the bottom of the sixth inning. After a few base hits by the Indians, and a wild pitch that allowed a run to score, Nova departed with a 5-3 lead. Dellin Betances replaced him, and allowed one of Nova's runners to score, further cutting into the Yankees lead, which at this point stood at 5-4.

The Yankees hope to build upon this victory as they send Chad Green, who will be making his third career start, to the mound tomorrow night to face off against Corey Kluber, the 2014 AL Cy-Young award winner. Aroldis Chapman made it interesting in the bottom of the ninth, but thanks to some instant replay, this nail biter ended with a Yankee victory.