Why the Yankees SHOULD NOT trade Andrew Miller

By Unknown - July 07, 2016
As the Yankees continue to prove that they are nothing more than simply an average team, trade rumors are once again coming to the forefront of the discussion. Anybody who has watched this team play on a consistent basis, with the exception of maybe Randy Levine, is well aware of its obvious flaws. I've argued on a number of occasions that the Yankees should be sellers come July 31st. Most of the trade rumors we've been hearing have pertained to Aroldis Chapman and Carlos Beltran, both of whom are free agents at the end of the season. Another player often mentioned is Andrew Miller. Although Miller may be able to net the Yankees a relatively high return, he should be untouchable. Throughout his brief time in pinstripes, Miller has proven himself as someone the Yankees should keep in their long-term plans. 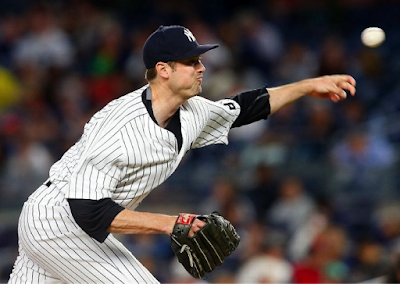 Perhaps the only exciting thing about the 2016 Yankees is the back end of the bullpen. Miller, along with Dellin Betances, and Chapman have combined to form "no run DMC." This troika has been phenomenal closing out games, on the few chances the offense and starting pitching have been able to hand them a lead in the seventh inning of course. Recently named to the American League All-Star team, along with Betances, Miller has had the best year of the three. While Chapman was serving his 30 game suspension early on, Miller picked up where he left off last year as the closer. As soon as the Cuban fireballer made his Yankee debut, Miller seamlessly slid into the eighth inning role to continue his dominance.

Assuming the Yankees follow through on becoming sellers, as they should, Chapman will more than likely be gone due to his impending free agency. Miller, on the other hand, is locked up for the next two years at a very reasonable nine million per season. While it can certainly be argued that his favorable contract situation will make him more valuable than Chapman, players like Miller don't come around too often. As of July 7, Miller is 5-1 with a 1.47 ERA in 36.2 innings pitched. He's also struck out an astonishing 66 hitters. These are elite numbers.

Since arriving in the Bronx last season, Miller has been nothing short of a consummate professional. Signed to serve primarily in a set up role to Betances following the 2014 season, Miller quickly assumed the closers title and ran with it. As previously mentioned, he selflessly moved back into the eighth inning after the Yankees acquired Chapman this offseason. That being said, he's one of the best relievers in baseball. A set up guy being, at the very least, a top three reliever in baseball is quite an impressive feat.

Let us not lose sight of the big picture either. The Yankees will be a good team again. As tough as it is to accept the current state of mediocrity, the organization should be looking forward to becoming contenders in 2017 and 2018. After this season, the contracts of Mark Teixeira ($23,125,000) and Carlos Beltran ($15,000,000) will be off the books. At the conclusion of the 2017 season, Alex Rodriguez ($21,000,000) and CC Sabathia ($25,000,000) will then disappear. That, ladies and gentlemen, is a lot of money. Once these exorbitant contracts are no longer on the payroll, we can only hope the Yankees will revert back to their old ways and once again open the check books. If we can sign some marquee free agents, and the youngsters, such as Greg Bird, Luis Severino, Aaron Judge, and Jorge Mateo, can emerge as solid major league players within the next few years, the Yankees should be contenders once again.

While this season is essentially a lost cause, the Yankees should not let that cloud their judgment. Trading players such as Beltran and Chapman makes all the sense in the world. Even moving Brett Gardner or Brian McCann, both of whom are easily replaceable, is worth looking into. Miller is a different case. He is one of the few valuable pieces on the roster. If we were to remove Chapman AND Miller from the bullpen, every reliever not named Dellin Betances would be mediocre. This would create a train wreck, which would requrie quite an overhaul heading into the offseason.

I'd be more than comfortable heading into next season with Miller as the Yankees closer. He's proven he can thrive in the role, and he's eager to help the team out in any way possible. Due to the expectations for this unit heading into the season, losing Chapman will be disappointing for those looking for some sort of entertainment when watching the Yankees. Trading Miller would instantly turn the team's only strength into a profound weakness. I've already said the 2016 season is a lost cause, however my argument for keeping Miller is much bigger than this season. It's about the future of the organization moving forward.

The Yankees should be aggressive sellers as the deadline approaches. They should leave most options on the table, however Miller should be one of the few players GM Brian Cashman declares is unavailable. I expect the Yankees to contend in 2017 and beyond. Trading Miller would present an obstacle preventing this from occurring. Elite closers are not easy to come by at such an affordable rate. For a team that plans on winning in the coming years, the Yankees should act according. Trading those who provide this team with no long-term benefit makes all the sense in the world. Trading one of your most valuable assets runs contrary to that sense. Andrew Miller has been a tremendous Yankee, and I hope this organization gives him the opportunity to stay here for years to come and hopefully be a key part of a championship run in the near future.