By Chad Raines - July 01, 2016
The Yankees are coming off a split against the American League’s top team, the Texas Rangers. After being outplayed and games one and two and for the most part of game three the Bronx Bombers were able to rally late on Wednesday and walk-off thanks to a Didi Gregorius home run. Michael Pineda came up huge in game four and “No Runs DMC” lived up to their name, the Yanks were able to walk off again after Robinson Chirinos let a Tony Barnette pitch by to the backstop allowing Chase Headley to score. The Yankees now sit with a 39-39 record good for 4th place in the AL East. That being said these last two wins over the Rangers were beyond impressive and showed that these guys still have some fight left in them. That brings us to this weekend series where it will be a rematch of the 1998 World Series when the Bombers travel west to sunny San Diego to take on the Padres. 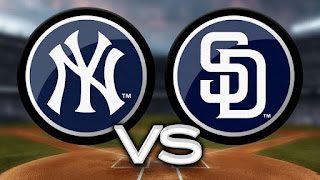 Nathan Eovaldi (6-5 5.19 ERA) vs. Colin Rea (4-3 5.05 ERA)
Talk about a matchup of guys that like to give up runs. After a strong start to the season, Eovaldi has come back down to earth and gotten hit hard in his last five games. He’s pitched so poorly that many fans via social media have been calling for manager Joe Girardi to remove him from the rotation. Rea can be dazzling at times but at others looks lost out there. The Yankees have a tendency to make mediocre pitchers look incredible so it will be important to jump on Rea from the start.
GAME TWO: (Saturday July 2, 2016| 10:10 PM ET)
Ivan Nova (5-5 5.32 ERA) vs. Drew Pomeranz (7-7 2.76 ERA)
This matchup looks like a disaster on paper and it might be even worse in reality. Ivan Nova has a ERA of 9.00 in his last three outings. Needless to say, that isn’t good whereas San Diego starter Drew Pomeranz is twirling an All-Star season. Spacious Petco Park should help Nova’s ERA dip a little bit but the Yankees have their hands full with Pomeranz who in his last start vs. Cincinnati picked up the win and also deposited his second career homerun into the right field bleachers.

GAME THREE: (Sunday July 3, 2016| 4:40 PM ET)
Chad Green (0-1 7.20 ERA) vs. Andrew Cashner (3-5 4.75 ERA)
This is an intriguing matchup in the series finale as the Yankees will bring up Chad Green who has thrown a total of five innings this year. He’ll be opposed by the big right-hander Andrew Cashner who is making his first start since going on the DL back in May. Both pitchers will probably have the nerves going wire to wire so expect a lot of offense in this game.

Three Yankee Players to Watch
Three Padre Players to Watch
Keys to Victory
Prediction:
I’m giving the Yankees no shot in game two. Drew Pomeranz has been too good and Ivan Nova has been about as bad as anyone can be of late. I like Eovaldi for a big bounce back game in the series opener. Game three is a tough one, conventional wisdom would be to side with San Diego based on Cashner having much more experience than Chad Green but after these last two huge wins against the Rangers I’m predicting the Yankees win games one and three and grab themselves a series victory on the west coast.