By Unknown - July 15, 2016
After finishing the first half by winning three out of four against the AL Central-leading Cleveland Indians, the Yankees began the second half with a loss to their arch-rivals: the Boston Red Sox. The Yankees sent the struggling Michael Pineda up against All-Star knuckleballer Steven Wright. Wright dominated for the first five innings before the Yankees' offense woke up in the sixth inning, tagging him for three runs. Pineda started the game off well, but it went downhill after he gave up a home run to the ninth hitter in the Red Sox's lineup: Ryan Hanigan, who came into the game hitting below .200 with no home runs all season. 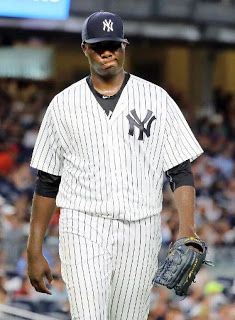 As previously stated, Pineda started the game off well by retiring the first eight batters without an issue. After falling behind in the count, Pineda was forced to throw a fastball and Hanigan jumped all over it, depositing it into the left field bullpen.

In the fifth inning, Pineda walked Jackie Bradley Jr. Subsequently, Travis Shaw crushed a fastball to right center field, giving Boston a 3-0 lead.  The next inning did not get any better for Pineda as he again gave up a two-run homer, this time to Xander Bogaerts.  He was lifted for Chasen Shreve immediately after.

The Yankees were able to score three runs on a Carlos Beltran two-run single, and a fielder's choice  RBI ground out by Brian McCann.


The Bombers look to have a better outcome tomorrow as they send CC Sabathia to the hill. He will face struggling left hander Eduardo Rodriguez. The Yankees' struggles against left handed pitchers have been well documented. They cannot afford to be dominated by Rodriguez tomorrow.  The team also hopes that Sabathia can return to his earlier season form, when he was one of the best pitchers in the American League.