Yankees give up three homers, can't produce offensively in 6-3 loss to Rays

By Unknown - July 30, 2016
In many ways this game encapsulated the story of the Yankees' season. Nathan Eovaldi pitched well enough to win, but the Yankees offense couldn't provide him with enough support. Five of the Rays six runs came way of the long ball. Decent starting pitching, inconsistent offensive production, and awful middle relief have been three defining aspects of the 2016 New York Yankees, all of which were featured tonight. It's even more sad that the Yankees couldn't take advantage of facing a pitcher who entered the game with a 2-11 record. With the deadline only two days away, this series loss to the Rays may be the final nail in the coffin for this Yankees team. 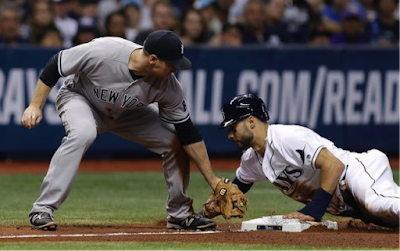 
Nathan Eovaldi, who pitched fairly well for most of the game, was plagued by two mistakes. In the bottom of the first, Brad Miller homered to center field, handing the Rays an early 1-0 lead. In the top of the third, the Yankees were propelled to a 2-1 lead courtesy of Brett Gardner's two-run blast. Unfortunately, as we have come to see throughout the course of this season, shutdown innings do not exist for Yankees pitchers. Eovaldi surrendered a two-run home run to Curt Casali, putting the Rays ahead 3-2.

Joe Girardi foolishly called on Anthony Swarzak to relieve Eovaldi in the bottom of the seventh, and that move backfired. With one out and the bases empty, Kevin Kiermaier's hustle paid off for the Rays. He successfully stretched what would have ordinarily been a single to right field into a double. He proceeded to steal third base. Steven Souza Jr's single brought home Kiermaier, making it 4-2 Rays. Swarzak's struggles continued when Tim Beckham blasted a two-run homer to extend the Rays' lead to 6-2.

The Yankees responded in the bottom of the seventh. Chase Headley lead off the inning with a solo home run, cutting the deficit to 6-3. With Gardner on first, Jacoby Ellsbury impressively drew his 10th catcher's interference of the season (he's amazing at this apparently), bringing the tying run to the plate. Carlos Beltran subsequently grounded into an inning ending double play, destroying any hopes of a rally.