A final tribute to Alex Rodriguez

By Unknown - August 12, 2016
Before I begin, I must note that this is probably the most emotional piece I've ever written here at the BBB. Alex Rodriguez's sudden, albeit forced, retirement has been difficult for me to mentally process this past week or so. Regardless of what one may think of his legacy and all the baggage associated with it, there's no denying that A-Rod has been a very consequential Yankee. During his time in pinstripes, A-Rod gave it his all. He may have made a number of mistakes along the way, but as far as I'm concerned, he's righted the ship. Though the retirements of Jorge Posada, Andy Pettitte, Mariano Rivera, and especially Derek Jeter, were quite emotional for me, A-Rod is truly the last player I can connect to my childhood. Having been born in 1995, Rodriguez has been a Yankee since about as far back as I started following baseball. I've also been in the building for quite a few big A-Rod moments, which I'll elaborate on in the subsequent paragraphs. Taking the above statements into consideration, I have to offer Alex an immense amount of gratitude for all he's done for this team. Whether you love him or hate him, Alex Rodriguez truly is one of a kind. 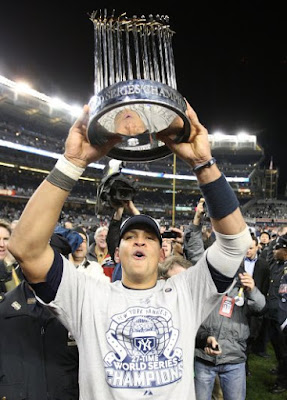 Photo Credit: Jed Jacobsohn/Getty Images
Throughout the years I've had the opportunity to witness two memorable A-Rod moments in person. Rodriguez had developed a reputation for choking in the clutch during his early days in the Bronx. This reputation wasn't effectively dismissed until his historic 2009 postseason, in which he helped lead the Yankees to their 27th championship. On April 19, 2007, with the Yankees and Indians tied in the bottom of the ninth inning, A-Rod came up with runners on second and third. He proceeded to hit a monster shot to center field, propelling the Yankees to a come from behind victory. As we know, the old Yankee stadium got LOUD. This was one of the most electric moments I've ever experienced. Since I was only 11 at the time, I regretfully can't furnish video footage of this great moment.

Last season, A-Rod had a comeback for the ages. After serving a year long suspension for his role in the Biogenesis scandal, Rodriguez returned for the 2015 season with something to prove. A-Rod hit his 660th home run, which tied him with Willie Mays for fourth on the all-time list on May 1st at Fenway Park. As we may remember, this was a pinch hit game winning home run. On May 7, against the Baltimore Orioles, Rodriguez hit 661. Since I was aware that A-Rod could pass Mays at any moment, I recorded every single pitch that was thrown to him that game. Fortunately, I didn't have to wait long, and was able to get a short of video, which I've shared below, of A-Rod becoming the player with the fourth most home runs in history.


Now that I've shared my personal feelings on A-Rod, I'd like to step back and assess how much he's meant to this franchise. We all know about the moronic scorched earth legal strategy A-Rod employed against MLB, the Yankees, and many others following his suspension for his role in the Biogenesis scandal, but for the sakes of this piece, I will not discuss that in further detail. A-Rod's performance and attitude on and off the field over the last two years has gone a long way in repairing the relationships he destroyed during the course of that saga. He's now in good graces with MLB, Commissioner Rob Manfred, the Yankees organization, and most Yankees fans.

After arriving to the Bronx in 2004, Rodriguez struggled to match the almost flawless reputation of teammate Derek Jeter. We all know that, statistically speaking, A-Rod has had a better career than Jeter, but there's no denying this was the latter's team. While A-Rod acknowledged and accepted this realization, but he still had such a strong desire to be accepted by the fan base. After seeing Rodriguez fail to perform in the clutch time and again, fans would often boo him when he stepped up to the plate. His poor postseason performances from 2004-2007 didn't do much to end such criticism. Despite putting up phenomenal numbers, and winning two MVPs, many believed A-Rod did not yet qualify as a "true Yankee."

In 2009, A-Rod finally put these discussions to a permanent halt. Having put the first batch of steroid revelations to rest in spring training, A-Rod had another big year, however the postseason is where he would end up cementing his legacy. In 15 playoff games, A-Rod went 19-52, which equated to an average of .365. He had 6 HR and 18 RBIs. In each postseason series, A-Rod had at least one game tying, or game winning hit late in the game. Whether it be his ninth inning home run off of Joe Nathan in Game 2 of the ALDS against the Twins, his game tying 11th inning home run against the Angels in Game 2 of the ALCS, or his game winning double in the ninth inning of Game 4 of the World Series against the Phillies, A-Rod delivered. As the Yankees hoisted their championship trophy, and subsequently paraded down the Canyon of Heroes, there was no denying that Rodriguez had finally earned his spot as a "true Yankee."

Rodriguez's success continued into 2010, but injuries shortened the next three seasons, before he served his suspension for the entirety of the 2014 season. 2015 was a comeback story for the ages. Although Rodriguez cooled off considerably beginning in August, seeing one of my favorite players have success again was amazing. That being said, this season has been tough for me to stomach as an A-Rod fan. While I understand that he hasn't come close to matching his 2015 production, and at-bats were tough to come by with Beltran relegated to a DH role in the weeks leading up to the deadline, I have been disgusted with the Yankees' treatment of their former super star.

Interestingly enough, I wrote an article describing my feelings on how the Yankees were ostracizing Rodriguez the day before the press conference announcing his "retirement," (CLICK HERE). To avoid redundancies, I won't touch upon those points again. I will say, however, that Joe Girardi is an absolute joke. I was in attendance on Sunday, the day of the press conference. Knowing that A-Rod only had five games left as a Yankee, one would think his manager would allow him to enjoy the little time he had left by playing in every game. But no, I did not get to see one of my idols play one final time. Girardi also reneged on his promise to let A-Rod play all three games in Boston. Such a blatant lie by our manager cannot carry over very well in the clubhouse. Since most of the players have been very vocal with their support of Rodriguez, Girardi may have done irreparable harm to his reputation amongst the players he's responsible for managing.

In his press conference, Rodriguez stated, "I also will hopefully be remembered as someone who tripped and fell a lot, but kept getting up." Well, Alex. I can assure you that this is how I will remember you. We all make mistakes, and you did everything within your power to rectify them. You've been a tremendous Yankee, who brought us a championship that I will never forget. I've supported you throughout all of your highs and lows. I'll continue to proudly wear my A-Rod jersey. You were an instrumental part of my childhood. I will forever be grateful for the countless unforgettable moments you've provided this franchise. When all the dust settles, I believe you will remembered in a positive light. Once more, thank you for everything, Alex. Best of luck in your future endeavors, whether they be with the Yankees organization, or not.