By Unknown - August 15, 2016
In what turned out to be a frustrating evening for the Yankees with runners in scoring position, Chad Green made a strong case for a spot in the rotation moving forward. For six innings, Green dominated one of the most potent offenses in the league. After his horrendous start yesterday, Luis Severino was demoted to Triple-A. The story couldn't have been more different for Green tonight. He did more than enough to remain in the rotation for the foreseeable future. Although they wasted many opportunities on this humid night, Aaron Judge's RBI double proved to be enough to propel the Yankees to a narrow 1-0 victory. 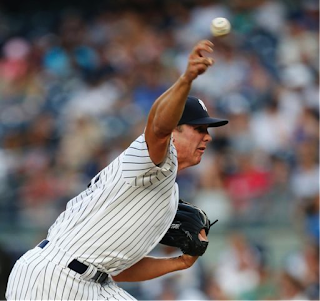 This night was all about pitching for the Bombers. In the best start of his major league career, and arguably one of the best by any Yankees starter this season, Chad Green did not disappoint. In six innings of work, Green struck out 11 Blue Jays! He only gave up two hits, and walked none. It was truly a dominant performance that should encourage the many Yankees fans, including myself, who have been frustrated by the organization's inability to internally produce starting pitching talent.

The Yankees turned to the their usual formula to close out the game. Tyler Clippard came on to pitch a 1-2-3 seventh inning. He was followed by the resurgent Adam Warren, who replicated Clippard's success in the eighth. Clippard and Warren have filled in more than admirably for Andrew Miller and Aroldis Chapman. Although neither of them is on the talent level of the two former Yankee relievers, they've matched, or even exceeded, their performances in the two weeks since the deadline. Dellin Betances came on in the ninth, and made us sweat. With runners on first and third, Chase Headley turned an impressive double play to clinch the victory.

Though Green's performance was surely a positive take away from this game, the Yankees struggled profoundly with runners in scoring position. The Bombers went 2-18 with runners in scoring position, leaving 14 runners on base. In the bottom of the fourth inning, none other than rookie, and instant fan favorite, Aaron Judge provided the Yankees with all the offense they would need tonight. His double to center field brought home Brian McCann, handing the Yankees the 1-0 lead that would eventually translate into a victory.

The Yankees hope to build on tonight's victory when they send Michael Pineda (6-10, 5.07) to the mound tomorrow night against Marco Estrada (7-5, 2.95). Although it's certainly a long shot, the Yankees are still in contention for the second wild card spot. These games against the first place Toronto Blue Jays are huge, to say the least. A series victory would position the Yankees quite well moving forward, especially when considering their struggles against their division rivals dating back to last season.