Could a Brian McCann trade be on the horizon?

By Unknown - August 09, 2016
The Yankees are finally getting younger, as has been evidenced by the team's moves at the non-waiver trade deadline, along with the recent forced retirement of Alex Rodriguez. We should expect to see more moves along these lines heading into the offseason. There are three veteran players that the Yankees should explore trading as we move forward: Chase Headley, Brett Gardner, and Brian McCann. While I don't believe the Yankees will part ways with the first two players, a McCann trade is very likely. With the emergence of Gary Sanchez, the Yankees have a prime opportunity to see one of their own grow, and succeed at the major league level. McCann, at age 32, simply doesn't fit into the long term plans. If the Yankees can put together a package to ship McCann out of town later this month, they should pull the trigger. 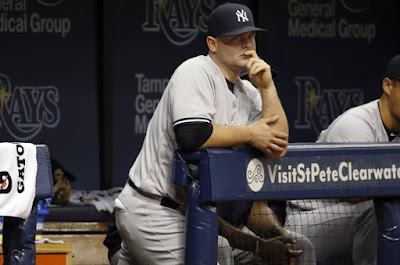 Before going any further, I must note that McCann was afforded a no-trade clause in his contract. Although the Yankees may want to part ways with their highly paid catcher, the decision is ultimately in his hands. That being said, the Yankees would have to eat a significant portion of his contract if they expect to get anything of substance in return for McCann, who is owed $34 million through 2018. After researching the details of his contract, I noticed a rather interesting clause. Should McCann have at least 1000 plate appearances combined for 2017-18, catch 90 games in 2018, and not end up on the disabled in the last year of his contract, a $15 million option will vest for 2019. This list of conditions is sure extensive, but given how durable McCann has been in the Bronx, such a deep financial commitment for two, or potentially three, years surely may deter a number of teams.

There are two teams that really stand out as possible trade partners. The first being none other than McCann's original team: the Atlanta Braves. The Yankees and Braves had discussions leading up to the August 1st trade deadline regarding a trade for the catcher. The brief discussions reached an impasse when the Yankees reportedly refused to pay most of the money owed to McCann for the duration of his contract. After hearing of this news, I instantly began wondering why the Braves, who are a team in transition similar to the Yankees, would want an overpaid veteran like McCann. Being the team that developed McCann, they must recognize his value as a clubhouse leader. Having an established veteran on such a young team is never a bad idea. Though a return to Atlanta would likely lead to an improvement in his personal statistics, and maybe even a happier living situation, part of the reason McCann left Atlanta in the first place to sign with the Yankees was to compete for a championship (and get paid a hefty sum, of course). Such a reality may make this matchup problematic.

The second team that may be interested in McCann is the Cleveland Indians. After being rebuked by Jonathan Lucroy, who later agreed to be traded to the Texas Rangers, the Indians' hopes of having solid offensive production from the behind the plate dissipated. Cleveland's catchers have struggled profoundly at the plate this season. As a team that is clearly going for it all this season, as the return they gave the Yankees in the Andrew Miller trade indicates, the Indians likely won't be hesitant to take on salary. If the Yankees have to turn this trade into a salary dump to unload McCann, it is a move that must be made.

From everything I've read, McCann seems to be a great clubhouse guy. While he's been an above average defensive catcher, and provided some pop behind the plate, McCann has fervently struggled to beat the shift. As a pull hitter who loves to use and abuse the short porch in right field, McCann has been unable to adjust to the defensive shifts employed against him. Since coming to the Yankees, McCann hasn't cracked the .240 mark for a full season. At times, he's become a walking pop up. Since the Yankees don't figure to be competitive again until 2018 (I actually think they'll be fairly decent in 2017 with the youth movement), it makes all the sense in the world to deal away a veteran who is taking time away from a potential star in the making in Sanchez.

I believe the Yankees made a mistake by essentially bidding against themselves in the 2013 offseason for Brian McCann. That being said, they were in desperate need of a catcher following the Francisco Cervelli/Chris Stewart debacle a year earlier. The time has come, however, for the Yankees to move on from McCann. I know it's a small sample size, but Gary Sanchez has impressed me with both his defensive and offensive abilities. It's about time the Yankees give this highly touted prospect a chance to succeed in an everyday role. The possibility of seeing Sanchez, Greg Bird, Aaron Judge, and maybe even Clint Frazier (if Gardner is traded) have starting roles in 2017 is very exciting. Ultimately, the next step in the youth movement is trading McCann, whether it be this month or during the offseason.