Don't give up on Luis Severino just yet


Like is often the case, 21 and 22-year old pitchers don’t always see results when they’re first called up to the Major Leagues. Whether it’s lack of secondary stuff or they’re simply nervous, every pitcher goes through a period of time where nothing seems to be working. As us Yankees fans have seen all year, Luis Severino has seemingly lost all confidence in himself and hasn’t put together a complete start during his entire 2016 campaign. That said, we’re not even close to the time we should give up on him as a starting pitcher. 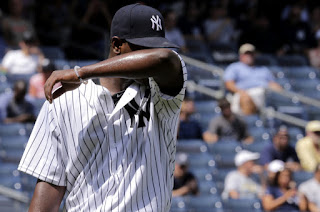 When Severino was first rated on the 20-80 scale that all prospects are given, he was deemed a 60 according to fangraphs. Here are the rest of his ratings;


We’ve seen the explosive fastball and why it was rated close to the max value, but we haven’t seen the plus changeup we’ve all been waiting for. His slider, at times, has also been impressive, but at some junctures of the game he’ll place it on a tee for the opposition. He’s also shown a lot better command in the big leagues than we were led to believe he would, as he’s walked just 36 batters across a 113.2 inning sample size. Given the fact he has two pitches rated 60 or better leads me to believe he’ll figure it out. Plus his third pitch (slider) was rated 50+ because at times it has hard bite and falls off the table, which we’ve seen. Consistency hasn’t been there for the young right-hander when throwing his slider as I’ve previously mentioned, however.

Just last year when Severino debuted in the bigs, he had a majority of his pitches working at all times. Opposing lineups hit just .231 against his fastball, .234 against his slider and .222 against his changeup. Even though it was a small sample size, he provided us with enough to delve into how good he can be. He also lasted less than five innings just once last season, which is very impressive for a 21-year old rookie pitching in New York. That’s important to note because by the fifth and sixth innings of games, Severino was facing players for the second and sometimes third time and still posted quality numbers.

Severino’s main problem has been his secondary stuff, like I previewed in the introduction. Most of the 2016 season he’s been a two-pitch pitcher, relying heavily on his plus heater and hard slider. I guess he’s teaching us to expect the unexpected because when we were first introduced to the young Dominican right-hander we were informed about how good of a changeup he had to complement his blazing fastball.  Out of 927 pitches that Severino has thrown this season according to PITCH/fx, 102 of them have been changeups. What is peculiar about that is opposing hitters are batting just .231 against it, which is the lowest opponents are hitting against any of his pitches. The issue at times is the disparity in velocity between his fastball and his change. His average fastball velocity in 2016 is 95.8 while the changeup is 90.9 MPH.

Without his secondary pitches working, the opposing teams know exactly what’s coming next, which is why his 95-MPH fastball has been consistently crushed all year long. The rest of the 2016 season and its offseason should be about the secondary pitches. If he gets both of them working and can pair them up with his fastball, his future is as bright as we all thought it would be.

Giving up on a 22-year old with all the makings of an elite pitcher is preposterous. Those who gave up on the likes of Mariano Rivera and Greg Maddux are kicking themselves where the sun never shines right about now. If he doesn’t pan out as a starter down the road and is forced to move to the bullpen, you can personally message me and tell me “I told ya so!” but until then, keep the faith in the Yankees organization that they’ll help mold the 22-year old into a front of the rotation type pitcher for the next 10-plus years.