How the Yankees can sneak into the playofffs

By Unknown - August 29, 2016
On numerous occasions, I have dismissed any postseason hopes for the 2016 New York Yankees. Surprisingly, the last few weeks have forced me to consider reversing my position. While snagging the second wild card is still a long shot, a viable path does exist at the moment. There is little room for error, but if the Yankees continue to click on all cylinders, as they have done for the last two weeks or so, anything is possible. The Bombers currently sit 3.5 games behind the Baltimore Orioles for the second wild card spot. While some factors, such as the performance of the five teams they must leapfrog, are out of their control, as long as the Yankees live up to their end of the deal they should be in an optimal position moving forward. Below I will identify, and outline, how the Yankees can build off of their recent success, and remain in the thick of the hunt for the duration of the season. 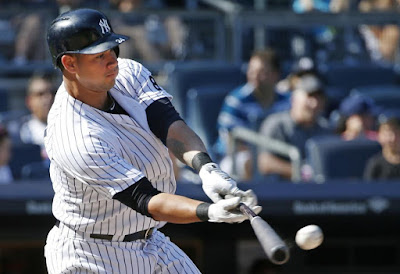 Prior to the trade deadline, the Yankees were abysmal at the plate. After dealing Carlos Beltran, their best hitter, to the Texas Rangers, I expected an exacerbation of problem. Fortunately, Gary Sanchez has the saved the day. It appears as if Sanchez has revitalized the entire Yankees team. That being said, the offensive fortunes are not limited to their rookie sensation. Starlin Castro, Aaron Hicks, Ronald Torreyes (I can't believe I'm even mentioning him), and even veterans such as Brian McCann and Mark Teixeira, have all performed relatively well at the plate as of late. If the Yankees can continue putting together good at bats from top to bottom of the order, the runs will come. Getting shutout this past Sunday when a victory would have brought the Yankees to within 1.5 games of the second wild card spot was tough, but I don't want to make too much of one game, when the previous two were so encouraging.

The Yankees lineup has clicked very well during this nine game span, which featured series victories against the Angels, Mariners, and Orioles. I recently wrote a piece advocating in favor of benching the team's unproductive veterans, primarily Brett Gardner and Chase Headley. For the most part, I've been proven correct. Gardner and Headley have struggled for much of the season at plate. Neither of the two are hitting above .260. Hicks has been one of the Yankees most productive players this month, hitting .307 with four home runs and nine RBIs. Torreyes has been on fire lately as well. If the Yankees continue to continue to ride the hot hand, and play those deserving of playing time, the results, as we've seen, will provide all the necessary justification. The team approach with runners in scoring position, and even in such scenarios with two outs, has been refreshing. In contrast to the "homer or bust" approach we witnessed during the first half, the Yankees have been taking a more conservative approach at the plate. Thus far, it's paid off. This all began with the call ups of Sanchez, Aaron Judge, and Tyler Austin.

2. Stability in the rotation (I'm talking to you, Michael Pineda)!

The Yankees rotation has been a pleasant surprise as of late. With the exception of Michael Pineda, each pitcher has done an adequate job of keeping the team in the game. Masahiro Tanaka has been phenomenal, finally living up to his contract. Having a verifiable ace atop the rotation has been huge. I haven't felt this confident in our number one since CC Sabathia in 2009-2012, unless we want to count Tanaka's initial few months of dominance in 2014. This year, Sabathia has been a solid number three starter, when the Yankees were counting on him to be a number five. After getting off to a tremendous start, and subsequently overcoming his share of struggles, Sabathia's last two starts against the Orioles and Mariners have been rather encouraging. Luis Cessa and Chad Green have also performed exceeding well since joining the rotation.

At the moment, Pineda is the number one problem. Carrying an ERA above five for most of the season, Pineda has been a disappointment. This was supposed to be the year when Pineda finally figured it out, becoming the pitcher the Yankees thought he was when they acquired him almost five years ago. That has not been the case. I'm holding out hope that he can put it together during this crucial last month of the season, but I'm not too confident in that regard. Even if Pineda continues to struggle, our other four starters should be able to hold it down. Considering the rotation was never this team's strongpoint, we should be impressed with what we've seen as of late. If this continues, the Yankees can remain in the wild card hunt until the very end.

The middle relief situation has been troubling for the Bombers all season. Going back to the glory days of no-run DMC, the Yankees struggled to trust any of the misfits they bused back and forth from Scranton. Adam Warren and Tyler Clippard, both of whom were reacquired in trades around the deadline, have been a more than formidable bridge to Dellin Betances. The rest of bullpen has provided reasons for concern.

Ben Heller, acquired in the Andrew Miller deal, has gotten rave reviews from scouts, however he may not be ready yet, as was indicated by his struggles on Sunday, although I would encourage we don't take that one performance too seriously. Blake Parker has put together a 1.17 ERA in six games with the Bombers this year so we could possibly see Joe Girardi test him in higher leverage situations. In 10 games with the Yankees, Tommy Layne has an encouraging 2.35 ERA so he should be an option as well. I think I speak for all Yankees fans when I say the likes of Nick Goody, Kirby Yates, and Anthony Swarzak should never pitch in another major league game, at least for the Yankees. Unless the Yankees are able to find more reliable arms in the bullpen, they will be in trouble as they prepare for some must win games.

I'm finally feeling optimistic about this Yankees club. Though my assessments above may appear obvious to some, it's worth emphasizing the importance of what is needed to remain a serious contender as we enter the pivotal month of September. The Yankees have recently shown us that they can compete with the better teams in baseball, however they must continue playing at this high level. If they struggle for as little as one series, that may eliminate them from serious contention. Gary Sanchez has helped revitalize the 2016 New York Yankees. Sneaking into the playoffs by winning the second wild card is something very few could have predicted after the deadline fire sale. As a fan, I'm excited for what the rest of the season has to offer. Even if the Yankees do fall short of stealing that second wild card spot, it will certainly be an exciting ride!