It's time to send the veterans to the bench!

By Unknown - August 23, 2016
It's becoming painfully clear that the Yankees lineup is filled with a number of deadweights. As exciting as the youth movement has been, such good vibes have been bogged down by the presence of Brett Gardner, Chase Headley, Mark Teixeira, and Brian McCann. None of these players deserves to be on the roster next season. While Teixeira is retiring at year's end, Headley, Gardner, and McCann have time left on their contracts. The Yankees must deal all of them this offseason to complete the rebuild, and allow more Baby Bombers to make their way to the majors. For this reason, I'm calling on the Yankees to relegate these veterans to bench roles moving forward. Realistically, the Yankees are not good enough to be a wild card team. Their pitching simply is not up to par. The duration of the 2016 season should be dedicated towards building for 2017 and beyond. Below I will outline my recommended approach for handling the aforementioned veterans. 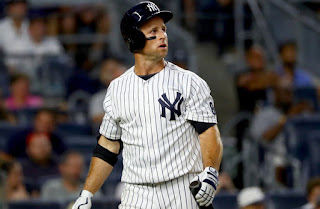 I will never understand why Brian Cashman thought it was a good idea to hand Gardner a four-year $52 million extension. Gardner is an okay player, but this was a gross overpay on the Yankees part. With Alex Rodriguez's forced retirement, Gardner is now the longest tenured Yankee on the roster. Some fans are emotionally attached to him for this reason. As a franchise, however, we have to move on. There is simply no room for both Gardner and Jacoby Ellsbury moving forward. Considering Ellsbury has five years left on his albatross of a contract, he's virtually unmovable. Gardner's contract may not match his abilities, but it's certainly affordable. I'm on the record for having said the Yankees should have sold high on their left fielder last season after he was named to the All Star team. I knew his 2015 first half was a fluke, and thus far I've been vindicated.

At the very least, Gardner is a serviceable outfielder with some speed. Clint Frazier, the centerpiece of the Andrew Miller trade, figures to be in the organization's long term plans. Although he may not be ready for the majors just yet, I don't think we should rule out seeing him on the big league roster to to begin next season. Even our favorite punching bag, Aaron Hicks, has performed well as of late. When given consistent playing time, he's played much better than the mediocre player we saw for most of the season. I can't believe I'm saying this, but I'd give Gardner's starting job to Hicks. When Tyler Austin isn't playing first or third he can also get some time in left field. It's clear that Gardner must be dealt this offseason. The Yankees have plenty of outfield depth in the minors. In September, we should see some of these players called up to the majors. Even if this group does not include Frazier, I'd much rather see a young player with upside than boring Brett Gardner.

Headley is another one of Cashman's biggest blunders. Trading Martin Prado, who statistically speaking, is the fifth best hitter in the National League, for Nathan Eovaldi was a reckless, and quite frankly, irresponsible move by Mr. Cashman. Making things worse, this move prompted the Yankees to resign Headley. While Headley is not awful, he's an average third baseman making above-average money. In this sense, he's in the same boat as Gardner. The Yankees would have been better off by simply holding on to Yangervis Solarte, who has turned into an above-average player in San Diego. For the sake of this piece, I'd rather not dwell on the past.

At this point, Headley is essentially a wasted at bat. The Yankees have two prospects, Jorge Mateo and Gleyber Torres, who could be in the third base picture, a few years from now. Tyler Austin can also play third base. Even Ronald Torreyes, when given consistent playing time, could likely perform better than Headley! Since this is Teixeira's last year, and Greg Bird will likely be the starting first baseman next season, I think the Yankees could benefit from giving Austin some playing time at third base. Teixeira still plays gold glove defense, thus making his fellow infielders better. For this reason, he's more valuable in a starting role than Headley. For the above reasons, I'd argue it's much more conducive for the Yankees to play Austin at third, rather than first. The Yankees HAVE to trade Headley this offseason. He epitomizes everything that is wrong with this ball club. His complacent attitude, and inability to produce, is extremely frustrating. That being said, he's a serviceable third baseman. If the Yankees eat enough of the contract, they should be able to bring back a decent starting pitcher in return. A change of scenery would benefit both the Yankees, and Headley. 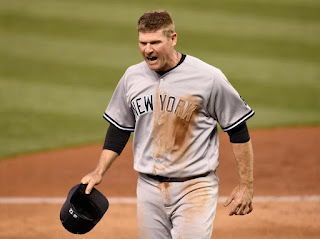 Out of the three players, McCann is the most likely to be traded. While I initially believed something could be worked out before the end of August, I'm growing much more skeptical of such an event occurring. The emergence of Gary Sanchez has made a McCann trade inevitable. Words can't describe how fantastic Sanchez has been since being called up. He can truly do it all. This may be a bit premature, but he could even be the next Yankees superstar! McCann has been around for a while so he knows what this means for his future. For his part, McCann has graciously accepted his DH role for the duration of the season, and willingly mentored Sanchez.

Though McCann has been a disappointment in the Bronx, he's still an above average catcher. Should he waive his no trade clause, and he most likely will if it means landing a starting catcher job, the Yankees will be forced to eat a substantial portion of what's remaining on his five-year $85 million contract. His hometown Braves seem like the ideal suitor, so we should expect such a move in the offseason, if not earlier. In the context of 2016, however, McCann should get most of his remaining at bats at designated hitter. Austin Romine has been a more than capable backup this season. Since he'll more than likely have the same role next season, Romine should catch on Sanchez's rare off days. Subsequently, Sanchez, as the best hitter on the team at this point, should DH on days he's not catching. 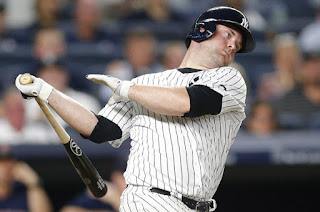 The Yankees will not be a playoff team in 2016. Though they've done a good job of fake contending over the last month or so, their performance over the course of the past week has exhibited their most apparent flaws. Blowing a 6-0 lead to the Blue Jays, being shutdown by a pitcher with a 6.00 ERA, and losing another winnable game last night proves they are a mediocre team. The starting staff and middle relief groups simply aren't good enough. If this is the reality, then I'm okay with it. Whether they want to admit it or not, the Yankees waved the white flag at the deadline. If the rest of this season truly is about letting the kids play, then moving forward they should get priority over unproductive veterans. Brett Gardner, Chase Headley, Brian McCann, and to a lesser extent, due to his imminent retirement, Mark Teixeira must be pushed aside. If there's anything the last month or so has taught us, it's that the Yankees' future is bright. Instead of wasting valuable playing time on players who will not be a part of the next dynasty, it's time to begin a full scale youth movement.