Post deadline reaction: The Yankees are FINALLY moving in the right direction

By Unknown - August 02, 2016
Ladies and gentlemen, the New York Yankees are officially in rebuilding mode. As a fan who has seen nothing but winning, never in my life did I think I would utter those words. In the days leading up to the deadline the Yankees traded Aroldis Chapman, Andrew Miller, Carlos Beltran, and even Ivan Nova! While seeing the first three players depart saddens me as a fan, they were moves that had to be made. The Yankees brought back a significant return in terms of prospects for Chapman, Miller, and Beltran as they look ahead towards a brighter future. While General Manager Brian Cashman has been lauded as a genius in many circles, I find such praise to be grossly premature. Let's not forget that he's the same man who dug us into this hole. That being said, I'm looking forward to seeing the many talented young players the Yankees acquired develop in the coming years. 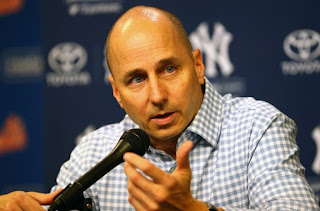 Overall, the Yankees had about as good of a deadline as I could have envisioned them having. They were able to transform an average farm system into one of the best in the league. This, ladies and gentlemen, is no small feat. For this accomplishment, Cashman deserves his share of praise. In this piece, I'll be assessing the two actual deadline moves: Carlos Beltran to the Rangers and Ivan Nova to the Pirates, along with an overview for the future of the organization. I won't discuss Tyler Clippard's acquisition since it has already been covered (CLICK HERE), and quite frankly I have no desire to.

For the record, we've already written extensively on the Chapman (CLICK HERE) and Miller (CLICK HERE) trades as well.

Trading Beltran and Nova were musts heading into Monday's trade deadline. Both players are impending free agents, and in a lost season the Yankees might as well get some value back for these two. In exchange for Beltran, the Yankees received last year's fourth overall draft pick, starter Dillon Tate, along with fellow pitchers Erik Swanson and Nick Green. Beltran, who is 39 years-old, and almost immobile in the field, will certainly help bolster the already poignant Rangers' lineup. Interestingly enough, Beltran even left the door open to a reunion with the Yankees this offseason. If the Yankees do end up cutting Alex Rodriguez, as has been rumored lately, Beltran could slide into the DH/mentor role nicely for 2017. Again, this is pure conjecture, but it's certainly worth looking out for. Aroldis Chapman made a similar statement. I would consider Chapman's return much more likely than Beltran's because it helps fill a newly created need at the backend of the bullpen.

After hearing that the Yankees dealt Ivan Nova, I instantly became infused with joy. Personally, I would have taken a bag of baseballs back for Nova, so receiving anything of substance for the inconsistent righty has to be considered a win. A free agent at year's end, Nova will hope to help stabilize the Pirates rotation, as they are in the thick of the playoff hunt. The Yankees are reportedly receiving two players to be named later for Nova so we'll see how this materializes in the coming days.

After reflecting on the trades that occurred this past week, I'm happy to say that I'm more excited about the Yankees' future than ever before. The thought of this team headed into 2018, when most of albatross contracts are officially off the books, is something all Yankees fans should be looking forward to. If the Yankees can move Brett Gardner and Brian McCann this offseason, the Braves are rumored to have serious interest in a reunion with the latter so maybe something can be worked out, they will have a impressively youthful roster come 2018. We should even be looking forward to 2017. Imagine the scenario below unfolding in 2017.

This lineup, though maybe not a playoff team, will be more exciting than anything we've seen in the Bronx since 2012. Also, with most of the huge contracts off the books, the Yankees will be poised to make a run at the premiere free agent class of 2018 (heading into the 2019 season). Members of this class include Manny Machado, Bryce Harper, and Jose Fernandez, just to name a few. Jorge Mateo and Gleyber Torres are two other middle infield prospects that figure to work their way into the equation at second and third base. The possibilities seem endless!

It would be disingenuous for me to conclude without discussing my take on our general manager. While Cashman should receive credit for the heists he pulled off this past week, many fans seem to have a relatively short memory. This is the same man who gave $153 million to Jacoby Ellsbury, $52 million to Brett Gardner and Chase Headley, $75 million to Brian McCann, and $155 million to Masahiro Tanaka! He's made a number of questionable signings dating back to Carl Pavano, but for the sake of this piece I won't relitigate issues that far into the past. The Yankees do not have a good history of developing prospects. Phil Hughes, Joba Chamberlain, Ian Kennedy, Andrew Brackman, and Manny Baneulos were all highly touted at some point. In the last fifteen years, only Robinson Cano and Dellin Betances have come up through the Yankees system, and developed into above-average talents. Hopefully, it's different this time. I don't have much confidence in Cashman's abilities as a GM, but I'd love to be proven wrong.

I never thought I'd be this happy to see the Yankees become sellers at the deadline. All the moves the Yankees made put them in a position to possibly build a new dynasty, and remain competitive for years to come. Unfortunately, we can't simply buy our way to a championship anymore. I'm almost certain that the Yankees will be big spenders once again in the coming years, but having a young core to build around is an amazing start. Watching the rest of the 2016 season may be a drag, but hopefully we'll get a chance to see some of the new additions very soon. The Yankees are in unfamiliar territory. They hadn't been sellers since Ronald Reagan was in the White House! Now that the organization has swallowed it's pride, and made the necessary moves, it's time to plan accordingly.