By Unknown - August 26, 2016
This weekend in the Bronx, the Yankees, who enter the series at 65-61, will have a perfect opportunity to gain some ground in the wild card race. Having just completed a successful 4-2 road trip, they return home to face the Baltimore Orioles, currently 70-57, a team that is 4.5 games ahead of the Bombers for the pivotal second wild card spot. The Yankees could have easily went a perfect 6-0 on the road trip, however their failure to figure out Jhoulys Chacin, and Michael Pineda's inability to keep the ball in the ballpark prevented such a feat from occurring. That being said, the Yankees still control their own destiny. Led by rookie sensation Gary Sanchez, the Bombers hope to win their biggest series of the year. A poor performance this weekend could bring the team's long shot playoff hopes to an abrupt halt. 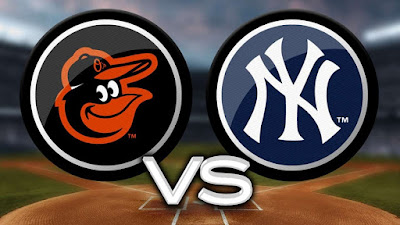 This pitching matchup certainly favors the Yankees. Gallardo has struggled quite a bit this season. He's lost his last three starts, though he performed much better in his most recent loss to the Houston Astros, giving up three earned runs in seven innings of work. I'm looking forward to seeing Cessa make his second career start. Last Saturday in Los Angeles, Cessa shined, pitching six shutout innings. Granted, navigating his way through the Orioles lineup will be significantly more difficult than his task against the Angels last week, however this game will serve as a major test for the young starter. If Cessa can deliver at least a quality start, the Yankees should be in a good position to win this game, assuming the offense does its job, of course.

Bundy has been on a bit of a role for the Orioles. He's won four of his last five starts. He bounced back from a disappointing outing against the Boston Red Sox, in which he didn't make it out of the fifth inning, in his next start, where he helped lead the Orioles to victory over the Washington Nationals. Since joining the rotation, Green has pitched extremely well. He followed up his six shutout innings against the potent Toronto Blue Jays lineup with six innings of one run ball in Los Angeles last Sunday. Unfortunately for Green, the Yankees offense was a no show in the 2-0 loss. Green settled down nicely after giving up one run in the first inning. The Yankees will more than likely need Green to put together another solid performance in order to emerge victorious in this one.

Gausman has had a season that can be categorized by a number of ups and downs. He pitched tremendously well in his last start against the Nationals, however he struggled for a bit before that. In a sense, he's similar to his Yankee counterpart: Michael Pineda. The Yankee righty has been a model of inconsistency this season. His antics on Monday night prevented the Yankees from sweeping the Mariners in Seattle. Despite being handed a lead by his offense, Pineda could not escape his number one weakness: the long ball. He gave up five earned runs in the 7-5 loss. Hopefully he'll be able to replicate the success he saw in his previous start against the Blue Jays. Prior to a rain delay, which caused him to be removed from the game, Pineda had pitched five shutout innings. This game is a wild card, but I'll give the Orioles the upper hand.

Let's just take a minute to marvel at Sanchez's impressive statistics. In 19 games this season, Sanchez has nine home runs and 16 RBIs. He's batting .389, with a 1.297 OPS. These numbers are simply astonishing. Furthermore, he was 10-22 on the most recent road trip, hitting four home runs. Needless to say, Sanchez is the most exciting member of this Yankees team. It's come to the point where his at bats are must see television. This guy truly does it all. He's been equally as impressive on the defensive side, nailing runners attempting steal, and developing relationships with members of the pitching staff. Sanchez has helped lead the Yankee turnaround, and subsequent youth movement, since the trade deadline. Hopefully he continues his hot hitting against the Orioles this weekend, because his team will certainly need him!

After being given some playing time, Torreyes put together a fantastic road trip. On the six-game trip, Torreyes went 9-16. He also hit his first career home run, and compiled three RBIs. Seeing Torreyes get some playing time at third base has been quite refreshing after being subjected to Chase Headley for most of the season. Despite Torreyes' recent success, we should expect Joe Girardi to continue his unwavering loyalty to Headley. It's clear that Torreyes deserves to start, at least until he cools down, but unfortunately we may not see much of him this series. Though many were critical of Torreyes early on, I'd argue his struggles were a result of him receiving no playing time. From watching him play, one can tell he really cares about the game. Juxtaposing Torreyes' energetic approach with the boring and complacent effort given by Headley, couldn't paint two more opposite pictures.

Hicks, who had been a favorite scapegoat for Yankees Twitter, has quietly turned his season around. He had a great road trip himself, going 7-14. It's clear that the Yankees believe Hicks is something special. While their hopes may be a little too high, it essentially guarantees that he'll get sufficient playing time. This means either Brett Gardner, Jacoby Ellsbury, or even Aaron Judge will get rest to fit Hicks into the lineup. I'm certainly not opposed to seeing Gardner take a spot on the bench, as I indicated in my recent article. Who knows, maybe the Yankees are on to something with Hicks. He seems much more relaxed at the plate as of late.

These three games against the Orioles may be the most important the Yankees have played up until this point in the season. Considering Gallardo's struggles this season, the Yankees should win the first game. The second and third games are toss ups. I've been won over by Chad Green so I'll give the Yankees a slight advantage in game 2. My lack of confidence in Pineda forces me to favor the Orioles in the series finale. Taking the pitching match ups, and other factors into consideration, I'm going to say that the Yankees win two out of three. I'd love to see a sweep, but I'm sure something will go wrong in one of these games. Let me reiterate. The Yankees MUST win two out of three in order to remain competitive in the wild card race. To place this in its proper context, the Yankees playoff hopes hinge on a number of rookies- Luis Cessa, Chad Green, Gary Sanchez, Aaron Judge, and Tyler Austin. Wow, that's exciting!