By Unknown - August 18, 2016
The Yankees hope to rebound from a tough series against the Toronto Blue Jays, in which they dropped two out of three, as they head to the West Coast to take on the Los Angeles Angels. The last two losses to the Blue Jays were a major setback for the Yankees' playoff hopes. After being propelled to a 1-0 victory on Monday, due in large part to Chad Green's dominance, the Yankees suffered two devastating losses. On Tuesday, following a lengthy rain delay, the bullpen blew a 6-0 lead. On Wednesday, Chase Headley's questionable fielding decisions were likely the determinative factor in the 7-4 loss. The Yankees enter the series at 61-59, good enough for fourth place in the AL East. They currently sit seven and a half games out of first place, and six games behind for the second wild card spot. Three games against the Los Angeles Angels (50-70) figure to be a perfect opportunity for the Yankees to reset themselves. At the very least, we'll continue to see the exciting at bats of Aaron Judge, Tyler Austin, and Gary Sanchez! 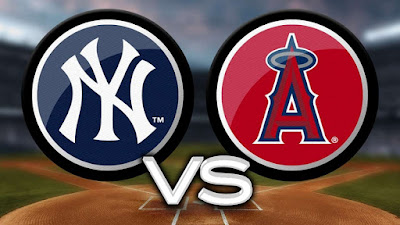 Tanaka has undoubtedly been the most consistent Yankees starting pitcher this season. While the rest of the rotation has suffered from inconsistencies, and injuries, Tanaka has been a much needed anchor. The Yankees will count on Tanaka to stop the bleeding Friday night. For the first time since the first couple months of his rookie season, Tanaka is pitching like the ace he is being paid to pitch like. Coming off two victories and solid performances, against the Cleveland Indians and Tampa Bay Rays, Tanaka hopes to shut down a dreadful Angels team, hopefully setting the tone for a successful series for the Bombers. Weaver, much like his team, has struggled profoundly this season. Normally finding himself atop the Angels rotation, Weaver has been unable to figure it out this season. He's given up an extraordinarily high amount of runs, thus contributing to his dismal numbers. This pitching matchup certainly favors the Yankees.

Nathan Eovaldi's season-ending injury, and Luis Severino's continued struggles opened the door for Cessa to be given an opportunity to showcase himself as a starter. Spending most of the season being shuffled between the minor leagues, and the big league bullpen, Cessa has struggled to find a rhythm. Acquired this winter, along with Sunday's starter Chad Green, from the Detroit Tigers, in exchange for reliever Justin Wilson, Cessa will make his first major league start on Saturday. The Yankees have a number of question marks surrounding their rotation moving forward, which makes Cessa's opportunity all the more important. If he can perform well, and hold onto the spot for the rest of the season, he'd also be making a case to remain a part of the Yankees long term plans. The Angels acquired Nolasco in the trade that sent Hector Santiago to the Minnesota Twins this past July. Since arriving in Los Angeles, Nolasco has struggled, losing all three of his starts. I'll call this game the wild card of the series. Since Cessa doesn't have much of a track record, it would be unfair to give the Yankees the advantage here, even though Nolasco has not performed well this season.

Green was absolutely phenomenal in his last start against the Blue Jays. He struck out 11 in six shut out innings against one of the most potent offenses in the league. The Yankees are counting on Green to help anchor a struggling rotation. If he can build upon this recent success, he can be a weapon for the Yankees moving forward. As stated earlier, the Yankees are in desperate need of starting pitching help. Having another pitcher, outside of Tanaka, who can be counted on to pitch consistently well would be huge moving forward. Because I'm excited to see how Green responds to the spotlight, I'll identify this as the game to watch. Chacin, like the other Angels starting against the Yankees this weekend, has had his share of struggles in 2016. Appearing as both a starter and a reliever this season, Chacin has struggled in both capacities for the most part. The pitching match up here provides the Yankees with an edge. 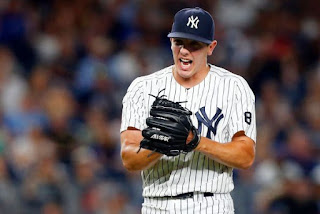 Since arriving in the Bronx, Sanchez has helped give Yankees fans hope for the future. It will be interesting to see if the confidence booster of being named starting catcher moving forward will contribute to even more success on Sanchez's part. Thus far, Sanchez is hitting .360 (18-50), with five home runs and 11 RBIs. It seems as if Sanchez can do it all. He calls a great came behind the plate, has a cannon for an arm, hits for power, has performed with runners in scoring position, and even runs well for a catcher! He is indeed the future. We all know that Sanchez's performance has put Brian McCann in an awkward situation. While McCann will find more of his ABs as DH moving forward, he most certainly won't be back with the Bombers in 2017. Sanchez, and Aaron Judge (who I will discuss below) are the two most exciting players on the roster as of now. 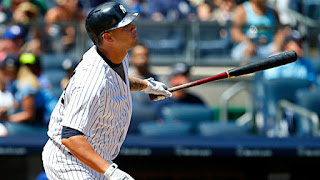 Ever since being called up this past Saturday, Judge has also given Yankees fans reasons for optimism moving forward. His home run to deep center field in his first major league AB was a historic moment. Judge, who is built like an NFL linebacker, figures to be fixture in right field for the Yankees as they prepare for a future filled with home grown talent. In five games this season, Judge is hitting .389 (7-18), with two home runs, and four RBIs. Judge and Sanchez should find themselves near the middle of the order, as they did on Wednesday, moving forward. It will be interesting to see how they adjust to having such prominent spots in the lineup. Judge is calm, cool, and collected for a rookie. His approach at the plate, and ability to hit the ball to all sides of the field, mirror that of an experienced veteran. This will be his first road trip in the majors so hopefully he hasn't gotten too comfortable in hitter-friendly Yankee Stadium.

After getting off to a red hot start to his Yankee career this April, Castro has struggled for much of the season. On the bright side, he's had a great August thus far. On Wednesday, Castro hit his 15th home run of the season, the most he's ever hit in the majors. After acquiring Castro from the Cubs, the Yankees expected a power surge from the 26 year old. In his last 30 games, Castro is hitting .275 with five home runs and 23 RBIs. To further amplify his recent success, in his last 15 games, Castro is hitting .296 with four home runs and 13 RBIs. Castro appears to be getting hot at the right time. With the infusion of youth that has been injected into what had been an aging Yankees roster, we can only hope that Castro has found himself. Seeing someone who is more than capable of hitting .300 hover in the .250s for much of the season has been a rather discouraging development.

Based on numbers alone, I'd give the advantage to the Yankees in this series. With the exception of Saturday, each pitching matchup favors the Bombers. Due to Nolasco's struggles, a case can even be made that a rookie who has seen a certain degree of success in the bullpen, and minor leagues, has a better chance for victory. That being said, we shouldn't be too quick to count out the Angels. They still have Mike Trout, one of, if not the, best players in baseball. For some reason, he always seems to give the Yankees trouble, so we shouldn't expect that to change this weekend. I believe each of our starters will perform well. Such pitching performances, in conjunction with more production from the likes of Sanchez, Judge, and Castro, should propel the Yankees to a sweep of the Angels. While winning two out of three may be the more likely occurrence, I'll hold out hope for the sweep!