By Unknown - August 29, 2016
After taking two of three from Baltimore last weekend, the Yankees look to make a legitimate playoff push as they face the Royals in a three game set that will usher in September. New York (67-62) sits 3.5 games back of the second wild card spot, and only a half game back of Kansas City (68-62). If either team dominates this series, it will likely make it extremely difficult for the other to make the playoffs. The Yankees, 6-4 over their last ten games, put on a show offensively against the Orioles, scoring 27 runs over the first two games of the series (although they were shut out in the finale) behind excellent performances from Starlin Castro, Gary Sanchez, and, essentially, the entire Yankee lineup. The Royals, winners of 12 of their last 14 and 19 of their last 26, haven’t lost a series since getting swept by the Rangers in the end of July. To say that they’ve been hot in August is a woeful understatement, and if the Yankees want to take the series and work their way back into the playoff race, they just might need to play their best baseball of the year. 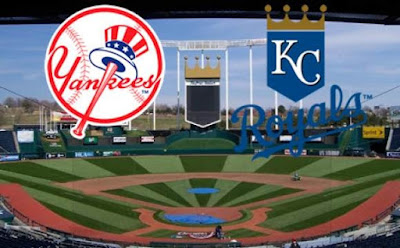 Michael Pineda (6-10, 5.02 ERA) vs. Dillon Gee (5-7, 4.55 ERA)
Pineda has been solid as of late. Over his past three starts, he has an ERA of 3.86, which is right about what you’d expect from a decent 3-4 starter. Perhaps even more exciting, he’s only given up one home run over those three games, which is a definitive improvement from his early-season form. Since being moved into the Royals starting rotation, Gee has pitched to an ERA of 5.09 over three starts, which is certainly not what the Royals were hoping for. He’s also shown a susceptibility to the long ball, as he has given up four dingers over that span. If the Yankee lineup can get to Gee and if Pineda can provide another quality start, this game should be winnable for the Bronx Bombers.

Masahiro Tanaka (11-4, 3.11 ERA) vs. Edinson Volquez (10-10, 4.88 ERA)
Masahiro Tanaka is the unquestioned best pitcher of the Yankees’ staff, but some have questioned whether he’s truly good enough to be a number one starter. That’s a debate for another day, but over his last two starts, the Yankees’ ace has looked every bit the part. Over those two starts, Tanaka did not surrender a run, pitching 7+ innings each time. Perhaps most impressive, though, has been his ability to keep opposing batters off base. Over 14 ⅔ innings, he has only allowed twelve men to reach, good for a WHIP of 0.82. His counterpart, Volquez, pitched five scoreless innings his last time out, but surrendered four runs in each of his previous two starts. In the month of August, Volquez’s ERA is an unimpressive 5.81, cementing the 2016 season as one of the worst of his career. However, it should be noted that Volquez can pitch a good game at any moment, and it’s often difficult to predict when he’s going to bring his A-game. Just because Tanaka is a better pitcher in general doesn’t necessarily mean that he will throw a better game on Tuesday night,

Luis Cessa (4-0, 4.11 ERA) vs. Ian Kennedy (9-9, 3.57 ERA)
Cessa has been a nice surprise for the Yankees since being promoted to the starting rotation for the remainder of the season. He has started twice and produced two quality starts, pitching to an ERA of 2.25 over 12 innings. Like Tanaka, Cessa’s greatest strength is his ability to keep men off base; his WHIP on the season is 1.08, and in his starts, it is even lower at 0.83. This is critical, as the Royals have a plethora of base stealers and claim baserunning as one of their strengths. Kennedy, however, has been absolutely lights-out in the month of August, posting an ERA of 1.11 in the month. The Yankees lineup has been hot, but Kennedy might be hotter, so it will be crucial that they get a good start from Cessa to keep them in the game.

2. Luis Cessa
Somewhat lost in Sanchez’s torrid August has been the fact that Cessa has actually been very good since being promoted to the starting rotation. He faces his toughest matchup yet in a duel against Kansas City’s white-hot Ian Kennedy, but so far, so good for Cessa, who is well on his way to earning a spot in 2017’s starting rotation.

3. Aaron Hicks
A third young player who is getting his first real shot this season, Hicks looked to be a disappointment for much of the season. Recently, however, he is turned it on, hitting .307 in the month of August so far and slashing .375/.500/.563 over the last five games. It should also be noted that, in the Yankees’ 3-1 series victory over Kansas City in May, Hicks hit .429, with a homer and three RBI. Keep an eye on him.

1. Get to the Royals’ starters. Other than Ian Kennedy, Kansas City are running out two pitchers who are very hittable, and if the Yankees can get to these pitchers early, they should have no problem winning the series.

2. Get good pitching out of the bullpen. Gone are the days of No-Runs DMC, but that doesn’t mean that the Yankees can’t still get solid performances out of Blake Parker, Tommy Layne, Adam Warren, Tyler Clippard, and of course Dellin Betances. If the bullpen can keep leads for them, it will be a lot easier to win the series.

3. Good hitting from the middle of the lineup. We saw the Yankees get production from all over the lineup in the first two games of the Baltimore series, and they’ll need to do some more of the same here. Gary Sanchez has been raking, but he, Mark Teixeira, Didi Gregorius, Starlin Castro, and whoever else finds themself in the 3-5 spots will need to hit well for the Yankees to get some serious runs on the board.

Prediction:
I see the Yankees taking two of three here. The first two games should definitely be wins (as long as the lineup doesn’t go cold), but I can’t see them breaking Ian Kennedy’s six-start unbeaten streak. If my prediction holds true, the Yankees will leapfrog the Royals in the standings and be right back in the thick of the playoff race.