By Unknown - August 12, 2016
Alex Rodriguez's career (at least as a Yankee) has come to an end. Fortunately, he went out in style. On a night that was supposed to be about A-Rod, Starlin Castro stole the show. Castro's four RBIs, all of which came with two outs, propelled the Yankees to a 6-3 victory. Rodriguez's RBI double in the first inning was certainly a bittersweet moment. Seeing him get one last hit before the conclusion of his Yankees career made the night worthwhile. A-Rod received an emotional send off in the ninth inning. With one out, Girardi once again reneged on a promise he made. Contrary to his earlier statements, he rightfully allowed A-Rod to play the field, albeit briefly, so he could have a proper send off. 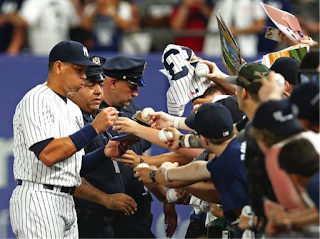 
In the top of the first inning, CC Sabathia gave up a home run to longtime Yankee nemesis Evan Longoria, giving the Rays a 1-0 lead. In the bottom half of the inning, Chris Archer struggled a bit with his command when he hit Brett Gardner on his left ankle. Though Gardner was visibly in profound pain, he remained in the game. With one out and Gardner on first, Alex Rodriguez stepped up to the plate. He received an impressive ovation. He proceeded to smoke an RBI-double to right center field. A-Rod's double, which one could clearly tell brought him great joy, tied the game at 1.

Sabathia surrendered the lead in the top of the third inning. With runners on first and third and two outs, Longoria once again gave the Yankees trouble with an RBI single to right field, putting the Rays ahead 2-1.

The Yankees retook the lead in the bottom of the fourth inning. With runners on second and third and two outs, Starlin Castro delivered a rare hit for the Yankees with runners in scoring position. His single brought home both Mark Teixeira and Didi Gregorius, making it 3-2 Yankees. After a Chase Headley single put runners on the corners, none other than Aaron Hicks ended the two-out rally with a weak pop up. Unfortunately, shutdown innings do not exist for Yankees pitchers, as Logan Forsythe's sacrifice fly tied the game at 3.

Starlin Castro continued to steal the thunder in the sixth inning. With Teixeira on second and two outs, Castro blasted a two-run home run to center field, handing the Yankees a 5-3 lead. In the seventh inning, what appeared to be a fly out to left by Aaron Hicks ended up narrowly making it over the fence, extending the Yankees lead to 6-3.

The Yankees hope to continue their long shot chance at capturing the second wild card when they send Masahiro Tanaka (8-4, 3.32 ERA) to the mound against Matt Andriese (6-3, 2.90). The Yankees should expect to go through somewhat of an adjustment period without A-Rod, as his veteran leadership will surely be missed, but the grind must continue. With Tyler Austin likely being called up tomorrow, another shot of youth into this roster makes for a compelling story line!