The Yankees are grossly mishandling the Alex Rodriguez situation

By Unknown - August 06, 2016
As has become evidently clear, the Yankees are in the midst of a transition period. After becoming sellers at the trade deadline for the first time in nearly three decades, the team is prioritizing the future. For the record, I have no problem with this. One of the unfortunate consequences of this reality is the marginalization of former-super star Alex Rodriguez. Prior to the deadline, Rodriguez found himself as a frequent bench occupant due to the need of protecting the health of Carlos Beltran, who brought back a significant return last week at the deadline. Before going any further, it would be disingenuous for me not to disclose that I'm a huge A-Rod supporter, and have been for quite some time. That being said, the way the Yankees have ostracized Rodriguez, is not only an insult to the player, but also an illogical approach for the organization to take, regardless of what you may think of the often maligned former-super star. 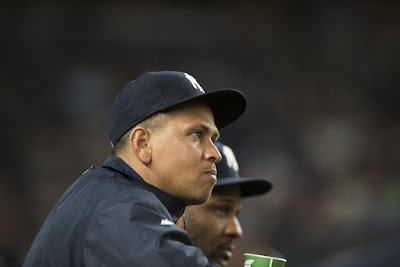 
Acquired in 2004 from the Texas Rangers, Rodriguez is by far the longest tenured Yankee on the roster. He has certainly had his share of highs and lows with the organization. From 2004-2010, Rodriguez was one of, if not the, best player in baseball. Though he may have developed a reputation for not performing in the clutch, his numbers speak for themselves. Before the start of the 2009 season, Rodriguez had to address the revelations of his steroid use. He did so in a professional manner, and responded in a big way during the postseason. Whether one likes him or not, there's no denying the fact that A-Rod was an integral part of the 2009 championship team. There were times when he singlehandedly put the team on his back. It was a run that we as Yankee fans will never forget.

From 2011 to the present, Rodriguez has struggled with injuries. Obviously, he was suspended for the entire 2014 season due to his role in the Biogenesis scandal. Rodriguez's scorched earth approach towards the organization appeared to have permanently soured the relationship. As a prospective law student, I can assure you that suing the Yankees, and their team physician was not only awful for optics, but also an unfeasible, and frivolous legal strategy. In 2015, Rodriguez shocked the baseball world by flawlessly returning from his suspension. His performance and behavior on and off the field made him worthy of redemption and forgiveness. Heading into this season, the Yankees were counting on A-Rod to replicate his 2015 success, but that has not been the case, thus bringing us to the present situation.

Although he began the season as the everyday DH, Rodriguez has progressively seen a decline in his playing time. This may have been justified while Beltran was on the roster because the Yankees had to ensure the health of their best offensive player for any potential trade, and as we've seen, Beltran should not be playing the field in his present condition. At this point, Rodriguez was forced into a platoon role of sorts. Due to his profound struggles against righties this season, Rodriguez saw most of his playing time come against lefties. Again, this may have been a blow to Rodriguez's ego, but it made sense.

At this point in time, the Yankees have completed ostracized Rodriguez. He doesn't even play against lefties, or pitchers he's historically had success against. Regardless of whether there is any malicious intent being displayed by the Yankees organization, this approach runs to contrary to common sense. If the team has no intention of playing A-Rod, why not release him? Why continue to play with a 24-man roster? The very fact that Aaron Hicks, who cannot even bat .200, is getting ABs over Rodriguez is a joke. It's crazy to believe, but A-Rod is still the biggest star on this team. I was in attendance for Friday's 13-7 victory over the Indians. Of course, A-Rod was relegated to bench duties. I know I may be presenting anecdotal evidence, however most of the fans I spoke with were disappointed not to see him. He is STILL a driver of ratings. He's also four home runs shy of 700!

The Yankees would much rather give ABs to their younger players, such as Gary Sanchez, moving forward. I have no problem with this. Alex Rodriguez is owed roughly $27 million between the rest of this season, and all of next season. This is a substantial amount of money, even for the Yankees. The only value they could be realistically getting out of him now is simply his presence for the younger players. A-Rod knows a lot about the game of baseball, and undoubtedly has a plethora of knowledge to share with the next generation of Yankees. On the other hand, what the organization is doing to him is an embarrassment. In his last start against the Tampa Bay Rays a little over a week ago, Rodriguez struck out four times. While many will say this is proof that he's done as a player, and that's certainly a sound argument, we also must understand that the Yankees haven't given him an adequate opportunity to get on a roll.

For his part, Rodriguez has handled this tricky situation as professionally as possible.  It's rather comical that the Yankees claim to still be competing for the second wild card spot, but will continue to start a guy in Aaron Hicks, who simply cannot hit major league pitching. Even in his current state, Rodriguez is a far better hitter than Hicks. In 216 ABs this season, A-Rod does have nine home runs. It's not a stretch to believe he could have hit around 25 if given fair playing time.

Seeing the Yankees treat A-Rod this way truly angers me. He's publicly accepted his fate, even though we all know sitting on the bench must be killing him deep inside. If the Yankees really do have no intention of playing A-Rod for the rest of the season, or next for that matter, they must release him. The current arrangement is working for neither side. A-Rod's tenure in the Bronx may have been tumultuous at times, but he has meant a lot to this franchise. He's nowhere near the Yankee icon that Derek Jeter and Mariano Rivera were, but he deserves some common decency and respect. The Yankees should either give him some ABs, or release him, instead of prolonging an awkward and illogical arrangement.