By Unknown - August 11, 2016
It was a night of opposites for the Yankees in tonight’s 4-2 win. As starter Michael Pineda (6-10, 5.07 ERA) delivered a solid performance on the mound, his offense failed him, scoring just one run.

However, things got better once they hit the Boston bullpen.

Brad Ziegler came in relief for Eduardo Rodriguez and was, well, shaky. After Gary Sanchez, Aaron Hicks and Brett Gardner all singled, Jacoby Ellsbury came to the plate. He roped a line drive to left field that appeared would be the 2nd out, but rookie Andrew Benintendi misplayed it, allowing two runs to score. Alex Rodriguez, playing in his last game at Fenway, came to the plate with the bases loaded. He grounded out, but brought in Gardner, giving the Yankees the 4-2 lead. 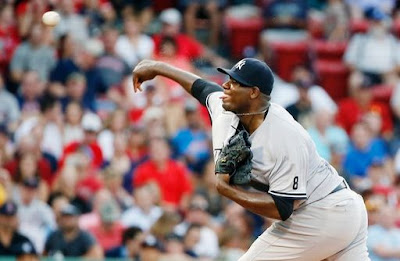 For the Red Sox, they really couldn’t have asked for a better start from Eduardo Rodriguez (2-5, 5.43 ERA). He tossed seven innings of three hit, one-run ball. His only mistake coming off the bat of Austin Romine, who socked a solo shot out of Fenway, over the Green Monster.

Big Mike went six innings, allowing eight hits and two earned runs while striking out three. In the first inning, Hanley Ramirez singled in David Ortiz from second base giving the Sox the 1-0 lead. After Xander Bogaerts singled, Ramirez again caused some damage, this time doubling to the right-center gap. 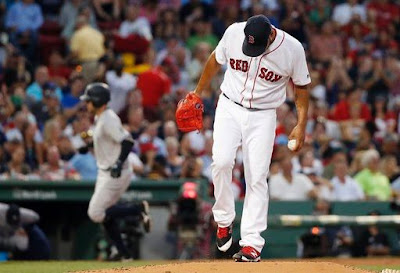 Luis Cessa, recalled from AAA today, pitched two innings of solid relief. He struck out Bogaerts and Ortiz en route to a 1-2-3 inning. Then, with the lead, he went back out for the 8th inning and retired the Sox in order.

Dellin Betances came in for the save and caused a bit of a scare, walking one and allowing a runner to get to 3rd, but ultimately came away with no damage done.

In his last ever game at Fenway Park, Alex Rodriguez went 0 for 4 with an RBI.