By Unknown - August 28, 2016
There can be no minimizing the importance of this series finale for the Yankees. Having won the first two games of the series, the Yankees entered Sunday's matchup 2.5 games behind the Orioles for the second wild card spot. A win would have brought them within 1.5 games, while a loss would have pushed the Bombers back to 3.5 games behind. Unfortunately for the Yankees, the latter of these diametrically opposed scenarios occurred. Securing a victory would have made their playoff hopes all the more realistic, however the offense failed to show up. As has been the case for most of the 2016 season, the Yankees came up just short. 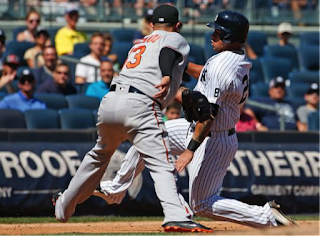 
CC Sabathia certainly did his part on this scorching hot Sunday in the Bronx. In 6.2 innings, Sabathia only gave up three runs, two of which Adam Warren allowed to score (this will be discussed later) and six hits, while managing to strike out eight. On any other day, most fans would be more than happy to see this kind of start from Sabathia. It's hard to win when the offense can't put anything together against the opposing pitcher. It appears as if the Yankees scored all of their runs on Friday and Saturday, leaving nothing in the tank for today's effort.

For most of the game, Sabathia and Kevin Gausman traded zeroes. Contrary to the first two games of the series, the Yankees struggled to have an early offensive outburst. The Yankees had a rough day with runners in scoring position, leaving seven on base. They were able to reach base against Gausman, but couldn't capitalize on the few opportunities they did have. The Yankees ruined perhaps their best opportunity of the game in the bottom of the fourth inning. With no outs, Gary Sanchez attempted to go from first to third on a Mark Teixeira single, making one of his only mistakes since arriving in the Bronx. He was subsequently thrown out by the right fielder, Steve Pearce. The next hitter, Didi Gregorius, also singled. Needless to say, had Sanchez not attempted to stretch his luck, the Yankees may have been able to get a rally going this inning.

In the top of the sixth inning, the first run of the game came courtesy of a solo home run off the bat of Pearce. The game got out of hand in the bottom of the seventh inning. After Sabathia departed with the bases loaded and two outs, Adam Warren gave up a two-run single to none other than Steve Pearce, handing the Orioles a 3-0 lead. In his second major league appearance, Ben Heller was given an official welcome from Mark Trumbo, the MLB home run leader. His two-run blast put the Orioles ahead 5-0.

Tomorrow night, the Yankees begin a three game series against the Royals, another team they trail in the wild card standings, in Kansas City. This series will also be a test for the Bombers. Having won an impressive series victory against the Orioles this weekend, they will hope to build on this recent success, and put today's tough lost behind them. The Yankees will send perhaps their worst starting pitcher at the moment, Michael Pineda (6-10, 5.02 ERA), to the mound. He'll face off against former-Met Dillon Gee (5-7, 4.55 ERA). Both teams have overcome brutal starts, now finding themselves in the thick of the playoff hunt. It will be an interesting series for sure!