By Unknown - August 21, 2016
Once again, Chad Green made his case for being a part of the Yankees long-term plan. On an ordinary day, his six innings of one-run ball would have been more than enough to secure a victory. Unfortunately, the Yankees reverted back to their old ways offensively. The Bombers finished the day 1-7 with runners in scoring position, leaving a total of eight runners on base. Perhaps the most exciting highlight of an otherwise boring game, was Jacoby Ellsbury's home run-robbing catch in the bottom of the fifth inning. Needless to say, this was a frustrating one to watch. Seeing the Yankees look completely lost at the plate against a pitcher who entered the game with a 5.92 ERA is truly mind boggling. 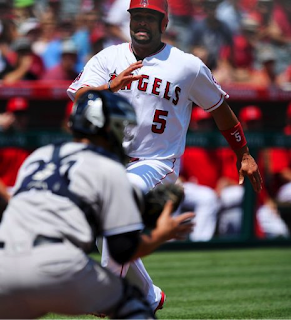 AP Photo/Mark J. Terrill
Green settled down nicely after getting off to somewhat of a rocky start in the first inning. With two outs, the young righty gave up a single to a player he idolized growing up: Albert Pujols. Andrelton Simmons then stepped to the plate with runners on first and second, proceeding to single to left field. Brett Gardner's throw came very close to nailing the aging Pujols, however it did not arrive on time, giving the Halos an early and decisive 1-0 lead.

For most of the afternoon, the Yankees struggled to get anything going against Angels starter Jhoulys Chacin. The Bombers were able to get six hits off of Chacin, and put runners in scoring position on a number of occasions, yet the big inning eluded them the entire afternoon.

In the bottom of the fifth inning, Ellsbury did his best to match Gardner's tremendous play last night. Gardner, after robbing C.J. Cron of a two-run home run in the seventh inning, fell into the stands, thus completing one of, if not the, most impressive catches of the 2016 season. The circumstances were somewhat similar in the fifth. After blasting an offering from Green to deep centerfield, Pujols was visibly dismayed upon discovering Ellsbury had stolen a two-run home run from him.

With two runners on in the bottom of the eighth inning, Simmons once again came through for the Angels. His single to right field brought home Pujols, providing the Angels with an insurance run. Aaron Hicks' throw to third nailed Cron to end the inning. Just a few batters earlier, Mike Trout had attempted to steal second, however Gary Sanchez, once again, showcased his cannon. The inning could have been much worse had it not been for Sanchez's defensive prowess.

The Yankees hope to rebound from this disappointing defeat when they begin a three game series against Robinson Cano and the Mariners tomorrow night. Michael Pineda (6-10, 4.89 ERA), the former-Mariner, will start for the Bombers. He'll be opposed by Cody Martin (1-2, 3.14 ERA). Though the Yankees should have completed an easy sweep of the Angels, taking two out of three will suffice. The Bombers still remain very much in the playoff hunt moving forward. The next three games against the Mariners, who the Yankees trail in the wild card standings, may go a long way towards determining whether or not this team is indeed an actual contender.