By Unknown - August 31, 2016
The Yankees successfully rebounded from a tough loss on Monday night against the defending champions, with a solid, but frustrating to watch, victory. On a night in which the Bombers left 13 men on base, and went a pathetic 2-16 with runners in scoring position, they narrowly defeated the red-hot Royals. This win was HUGE. Losing the first two in Kansas City would have been devastating. This victory allowed the Yankees to keep pace with the Orioles, and remain 3.5 games out of the second wild card spot. Thankfully, Jacoby Ellsbury earned his money tonight, leading the Bombers to a 5-4 victory in 10 innings 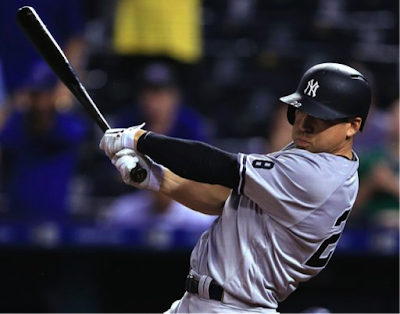 
Aaron Judge began the scoring in the top of the second inning with a two-run home run to left center field. Ever since getting off to a red hot start following his call up, Judge has struggled, subsequently forcing him to extend his strike zone. The results of this being an increase in strikeouts. Jacody Ellsbury's RBI double late the inning scored Brett Gardner, giving the Yankees an early 3-0 lead. The Yankees finally chased Edinson Volquez from the game in the fourth inning. Considering the amount of opportunities the Bombers had against the Royals de facto ace, they should have scored more than four runs against him.

Masahiro Tanaka, on the other hand, put together yet another strong start. He gave up two runs in five innings pitched. An extended rain delay following the fifth inning brought Tanaka's night to an end. Tanaka made two mistakes on the night. He surrendered an RBI triple to Jarrod Dyson in the third inning, which put the Royals on the board. In the fourth inning, Kendrys Morales hit a solo shot off of Tanaka, making it a 4-2 Yankee lead.

Following the rain delay, the Royals brought in former-Yankee Chien Ming Wang to face his former team. After putting runners on second and third with no outs, the Yankees failed to bring either runner home in yet another RISP fail. This reoccurring theme came back to haunt the Yankees on numerous occasions tonight, as mentioned in the brief introduction.

The Yankees would count on their bullpen of misfits to get the final 15 outs of the game. Adam Warren, and Tommy Layne failed to get it done in the sixth inning. Luckily for the Bombers, Tyler Clippard saved the day, with their lead already cut to 4-3. Coming on with runners on first and third with one out, Clippard induced Perez to hit into an inning ending double play.

The Royals tied the game in the bottom of the eighth against Dellin Betances. On first base with no outs, Lorenzo Cain stole second. Gary Sanchez's throw ended up in centerfield, allowing Cain to move to third. Morales' sacrifice fly tied the game at four.

In the top of the 10th inning with the bases loaded and two outs, Ellsbury's hard hit ground ball deflected off of pitcher Joakim Soria. Ellsbury proceeded to beat out the throw from third baseman Christian Colon, giving the Yankees a 5-4 lead. Things got interesting in the bottom half of the inning. The recently called up Chasen Shreve relieved Ben Heller with the bases loaded and one out. Shreve struck out Morales, and got Salvador Perez to fly out to center, handing the Yankees a much needed victory.

The Yankees hope to take the rubber game of the series tonight when they send Luis Cessa (4-0, 4.11 ERA) to the mound in the series finale. He'll face off against former Yankee Ian Kennedy (9-9, 3.57 ERA). The Yankees will be going for their fourth consecutive series victory. Being able to take two out of three from the Royals, who entered this series as the hottest team in baseball, would be a major statement from the Yankees. It would also allow the Bombers to remain in the thick of the wild card race moving forward.