By Unknown - September 13, 2016
The Yankees came into action on Tuesday in dire need of a win. They had lost two consecutive contests and needed a big performance from CC Sabathia in hopes that they’d head into Wednesday’s clash with Clayton Kershaw tied at one in the series. Series wins are a necessity at this juncture in the season and the big lefty had to shut down the Dodgers offense.

From the first pitch of the game you could tell CC was bringing his A-plus stuff to the table. He had all of his pitches working and we even saw a few fastballs touch 93 MPH like it was 2012 all over again. Despite all that, CC got in trouble right off the bat after walking Howie Kendrick to leadoff the game. Kendrick advanced to second and then to third on two groundballs but handed his helmet to the third base coach after Yasiel Puig went down swinging. He followed suit in inning number two allowing Kike Hernandez to third, but got another big strikeout to escape trouble again.

The Yankees offense was quiet until the third inning, where Ronald Torreyes advanced all the way to third base after a walk and a Rob Refsynder single. Unfortunately for the offense, Babe Ruth, I mean Gary Sanchez struck out to end the Bombers threat. Sometimes it's tough telling the two apart. The Pinstripes biggest threat came in the bottom half of the fourth when they were able to load the bases with two hits and a walk. Again, the Yankees failed to hit with runners in scoring position as Ronald Torreyes into a fielders choice. 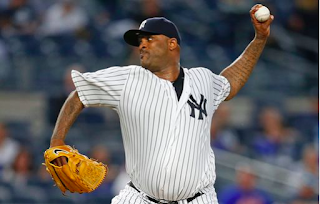 
New York got everything they could have asked for out of their hefty lefty. He threw 6.1 scoreless frames while allowing just three hits and striking out seven. As I mentioned earlier, he had command of all of his pitches and was locating them at will. The Yankees need series’ wins and CC put them in position to not this matchup up at one, with a chance to win on Wednesday. It was Sabathia’s five consecutive starts in which he’s allowed three runs or less.

The offensive fireworks didn’t start until the seventh inning and luckily it was off of the bats of the good guys. Jacoby Ellsbury was forced to enter the game as a defensive replacement after Aaron Judge left with a strained oblique. Ellsbury’s first at-bat was quite the entrance into Tuesday’s game as he belted a hanging curveball into the right field stands for a home run to break the scoreless tie. It took one more batter for that score to double as DiDi Gregorius pinch-hit and took Dodger reliever Ross Stripling deep for back-to-back homers. 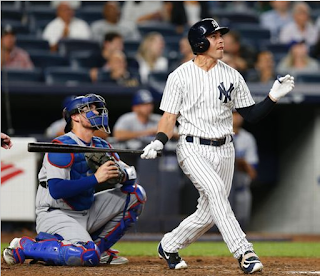 Enter Tyler Clippard in the eighth, but his outing lasted just 0.2 innings after allowing a hit. Manager Joe Girardi wasn’t taking any chances as he turned to Dellin Betances for the four out save. The final out came rather easily as Justin Turner hit a little squibber to first base.

But before we got back to Betances closing the game out in the ninth, “The Kraken” struck down on Yankee Stadium once again as Gary Sanchez deposited an opposite field home run to stretch the lead to 3-0 Yankees. This is Sanchez’s world and we’re all just living in it.

The ninth inning began with an infield single from one of the National League’s leading MVP candidates, Corey Seager. Yasiel Puig followed by swinging through strike three, Adrian Gonzalez flew out to center and Joc Pederson pulled a Puig and struck out as well. Betances notched his 11th save of the year.

Winning Tuesday’s game – and scraping together something resembling offense – is massive, especially when you show up to the park on Wednesday knowing Clayton Kershaw is the opposing pitcher. A win against the game's best pitcher tomorrow and look out, because the Yankees confidence could reach heights we haven't seen them hit.