By Chad Raines - September 12, 2016
Fresh off taking care of business against the Tampa Bay Rays winning three of four, the Yankees will take a break from their 10 game AL East stretch against Baltimore, Toronto, and Tampa, the Yankees will now welcome the Los Angeles Dodgers to the Bronx. Since the beginning of interleague play in 1997, the Dodgers have been to Yankee Stadium for just one day back in 2013 where the two teams split a double header at Yankee Stadium. This series provides extra excitement as these two teams rarely play one another in the regular season. Los Angeles will throw a pair of rookies in games one and two, and then they will throw the best pitcher in baseball in game three, so the Yankees will have to hit in games one in two to sure up some wins here. 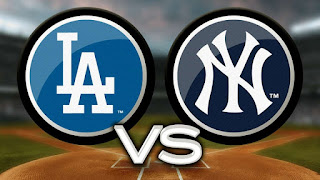 Game One (Monday, September 12 at 7:05 PM ET)
Jose De Leon (1-0, 4.50 ERA) vs. Bryan Mitchell (1-0, 0.00 ERA)
At 24-years-old, Dodgers number two overall prospect Jose De Leon made his MLB debut in a Sept. 4 start against the Padres. De Leon is the number 34 overall prospect in the MLB and the number six right-handed prospect according to MLB Pipeline. Since his 6.96 ERA in 2013, De Leon has posted ERA’s of 2.22, 2.99, and 2.61 in 2014, 2015, and 2016 before his call-up. De Leon sports a riding fastball that can touch 96 MPH, with a changeup that tends to be his go-to pitch, and a low-80s slider which is clearly his third pitch. Control is an issue for De Leon at times, so Yankee hitters will need to be patient and jump on him early. Opposing De Leon will be Bryan Mitchell, making his second start of the season since returning from injury. Mitchell was effective in his first start against Toronto tossing five innings of shutout ball. He only struck out two Blue Jays, so he would like to see those numbers improve, but pitching to contact boded well for Mitchell in his season debut.
Game Two (Tuesday, September 13 at 7:05 PM ET)
Julio Urias (5-2, 3.69 ERA) vs. CC Sabathia (8-12, 4.27 ERA)
Game two will feature two lefties on the opposite ends of their careers. Just recently turned 20-year-old on August 12, Urias is coming into his own as a starting pitcher. Urias is coming off an impress month of August where he went 4-0 in five appearances (three starts) with a 1.99 ERA. However, Urias found himself getting out of clutch spots as opposing hitters still managed to hit .292 off the lefty, and they are hitting .275 off him as a pitcher. Urias has the potential to become a long time top-line pitcher in a Dodgers rotation that has the best pitcher of the generation. On the other side, CC Sabathia will toe the rubber for his 27th start of the season. Sabathia’s 8-12 record has included his fair share of tough-luck losses as he ranks 68th of 82 qualified pitchers in lowest run support per start at just 3.85 runs per game. Sabathia has been less effective as the year has progressed with a 5.93 ERA in July, and a 5.35 ERA in August. He also only allowed one home run in April and May, and two in June, but as the summer has heated up, he’s been serving up the long ball as he allowed five homers in July, seven in August, and already four in two starts in September. He will have to be on top of his game against a fine young lefty in Urias.
Game Three (Wednesday, September 14 at 4:05 PM ET)
Clayton Kershaw (11-3, 1.89 ERA) vs. Michael Pineda (6-11, 5.07 ERA)
Making his first start since a nagging back injury that kept Dodgers ace Clayton Kershaw out of action for 10 weeks, Kershaw lasted just three innings against Miami. He allowed five hits and two runs while walking zero and striking out five. With expanded rosters, the Dodgers will continue to ease Kershaw in, but he will certainly look to pitch more innings in New York. Michael Pineda will make his 29th start of the season against Kershaw in the series finale. On the cusp of lowering his ERA below 5.00, Pineda will look to shut down the Dodgers lineup in a game that could be tough for the Yankees.
Players to watch for the Yankees:

1. Bryan Mitchell
Bryan Mitchell will make his second start of the year in the series opener in the Bronx. Mitchell was a guy that Yankee fans longed to have back since suffering a toe injury. Now that he’s back competing for a rotation spot in 2017, Mitchell will need to have his fastball pumping, and his curveball working against a tough Dodgers lineup. Mitchell had his way with the Blue Jays, so he should look to have the same approach against the Dodgers.

2. Jacoby Ellsbury
Hitting .360 with two homers over his last seven games, Jacoby Ellsbury has provided a nice spark for the Yankees in crunch time. The Yankees paid Ellsbury to perform like a stud all season, but if he can maintain this success down the stretch-run, he could be the difference between the Yankees making the postseason and the Yankees not making the postseason.
3. Gary Sanchez
Just when everyone thought Gary Sanchez was coming back down to earth, he launched two home runs on back-to-back nights against the Rays. He also nearly turned an intentional walk into a three-run homer as he drove a fly ball to the warning track for a sacrifice fly. Now the Yankees third hitter in the order, Sanchez should see plenty of run scoring opportunities.

Players to watch for the Dodgers:

1. Clayton Kershaw
Clayton Kershaw is the best pitcher of this generation, period. If it wasn’t for a back injury, Kershaw would be the clear-cut favorite to win the NL Cy Young, and possible the NL MVP as well. When Kershaw is at his best, opposing teams have little to no chance of winning. Luckily, he is easing his way back to form so he may not be in the game long enough to pose a lockdown threat against the Yankee lineup.

2. Yasiel Puig
Since being recalled from Triple-A where he slashed .358/.422/.605 with five homers in 24 games, Yasiel Puig is hitting .308 (4-13) with two home runs. Puig has a knack for shining under the bright lights, so look for him to have his opportunity for making his mark in this series.

3. Corey Seager
At 22-years-old, Corey Seager has taken the league by storm. He’s hitting .319 with 25 home runs and 68 RBIs this year, after hitting .337 with four home runs in 27 games last year. There is little doubt the Corey Seager is the NL’s rookie of the year, and he is coming into superstar form in a shortstop position that is filled with youthful talent across the league. Seager has already established himself as a force to be reckoned with, and he will look to impose his will on Yankee pitchers by taking advantage of short porch.
Keys to a series victory:
Article by: Chad Raines
Follow me on twitter @Chad_Rain
Follow the BBB @BronxBomberBlog
Bryan Mitchell CC Sabathia Chad Raines Gary Sanchez Jacoby Ellsbury Michael Pineda Series Preview